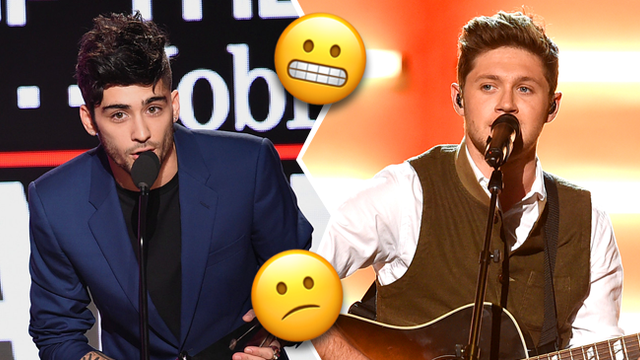 At the American Music Awards this past weekend (Nov 20.) there was a reunion of sorts. No, we're not talking about Selena Gomez and the stage... we're talking about ex-bandmates Zayn "Zaddy" Malik and Niall "Irish Prince" Horan.

The two ex-Directioners were both in attendance at the AMAs and haven't been spotted together for quite a while. In fact Zayn didn't even publicly congratulate Niall on his new single when it dropped a few months ago. So, there we all sat... waiting for some kind of interaction and then it happened...

Caught on camera by a fan, may we present to you... the world's saddest and limpest handshake of all time.

The precious Irish Prince reaches out to grab Zaddy's attention which seems to catch Z a bit off guard. Is it just us or does Zayn look like he's deep in fake conversation with the person sitting next to him, trying to avoid eye contact with his ex-bandmate? Nialler is having none of it because he's a decent lad and all he wants to do is touch the hand of his old BFF! (Side note: It's totally possible Zayn just literally didn't see Niall approaching? We'll let you decide.)

Either way, it was enough to make us spit out our god damn LuCoZaDe!

"Niall performing This Town"
"Zayn won Best New Artist"
"Niall and Zayn talked to each other"
Me rn:#AMAs pic.twitter.com/YPW28y8xUW

Despite that deliciously awkward encounter, it looked like there was no animosity between the boys as Zayn watched Niall perform "This Town" like a true fangirl.

Once a Directioner, always a directioner.