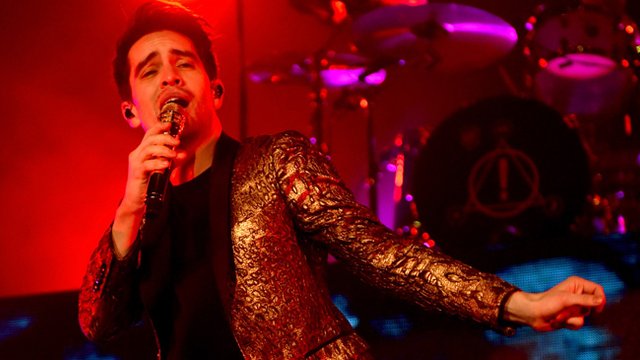 The Panic! frontman has been prepping himself for a starring musical role for years!

Panic! At The Disco fans were left fully shaken yesterday (April 11th) as news broke that singer, shirt-hater and all-round good guy Brendon Urie will be making his Broadway debut in the musical Kinky Boots for a short run later this summer.

Overwhelmingly, fans were delighted by this new development in Brendon's career, but, judging by some of these shocked reactions, they definitely did not see it coming...

But the simple fact is that we all should have foreseen this move from the studio to the stage a long time ago, as Brendon has been gearing up for a career in musical theatre ever since he first shot to fame.

There's the theatricality on show in the likes of the 'I Write Sins' video and the elaborate concert productions that have torn up arenas around the world over the last year. Not to mention the fact that his high pitched and powerful vocal performances make him more than capable of enduring the punishing 8-show weekly schedule.

Brendon has even dipped his toe into the classic Broadway songbook, covering the Guys And Dolls number 'Luck Be A Lady' at an awards show a few years back.

But while Brendon is undoubtedly a perfect fit for this kind of material, his presence on the Great White Way could still be seen as an odd move for some. Normally the type of musicians who tread the boards are at the end of an illustrious career, looking for some more stationary work to keep them out of a tour bus. Then there's the stunt casting normally reserved for the likes of long runners like Chicago looking for a temporary ticket boost to keep them afloat through tourist season. In the UK in particular, while the acting talent in the West End community is second to none, the musical names ready to make the transition tend to leave a lot to be desired.

So, why would Brendon choose now to hit Broadway after, arguably, the most successful album of his career to date?

Well, on Broadway, the relationship between musical theatre and wider pop culture has changed significantly in recent years. Hamilton and The Book Of Mormon soundtracks topped the Billboard charts; Nick Jonas and Carly Rae Jepsen have both tread the boards in high profile productions; and, most importantly, thanks to likes of Lady Gaga, Beyonce and, yes, Brendon Urie, pop music has never been in a more theatrical place.

Hopefully this is the beginning of a trend and soon we will see other major music artists follow Brendon into the world of musicals. Plus, we are sure there will now be more roles in the future available for Mr Urie. Personally, we think he'd make a great Emcee...