You've waited a long time but Brendon is back with an album full of Panic! treats for your pop punk ears to devour. We got an early listen and, because we know you need it, have written a track by track breakdown of what's coming at you from the fifth PATD release. Let's get to it then shall we?

We presume you've already heard this one. A big, punch-the-air anthem built for both arenas and dancefloors in equal measure. As an album opener it certainly sets the tone of what's to come - ambitious, hooky songs with choruses bigger than Brendon's forehead.

2) Don't Threaten Me With A Good Time

Leaked at the very end of 2015, this "Rock Lobster"-sampling, piano-led bop is Panic! at their most playful. Layered falsetto backing vocals add drama to the bass driven groove which acts as a tonal partner to "But It's Better If You Do" - when the lap dances were over, things clearly got messy. Also features the funniest lyric to be found on the whole record:

I've told you time and time again/I'm not as think as you drunk I am.

Don't Threaten Me With A Good Time

For those parties that get out of control way too early.

Another huge single, playing on the religious theming the band experimented with during the "This Is Gospel" tour. Brendon positions himself as an old school Southern preacher, spreading the good word in a pop punk style, with a church choir thrown in for good measure. Like a 2016 male-led update on Sister Act (which is a good thing btw).

The frankly petrifying video tells you all you need to know about this one - starting out cheery, we slowly descend towards hell as lyrics grow darker, beats get dirtier, chants loop menacingly and vocals are stretched to their limit to give us a manic look inside the darkest areas of the Urie brain. File this one under "tracks to play when the apocalypse comes".

5) Death Of A Bachelor

Gifted to the world just before Christmas, this Sinatra inspired croon adds a timeless quality to the wistful nature of the lyrics.

Death Of A Bachelor

Brendon's voice is very well suited to this kind of smooth material and the high notes sail by effortlessly. Perfect for singing around the piano in full tuxedo, glass of whisky in hand alongside the rest of your rat pack squad.

The first unreleased track on the album feels like a companion piece to A Fever You Can't Sweat Out track "Theres A Good Reason These Tables Are Numbered Honey, You Just Haven't Thought Of It Yet". Playful horns and drums rattle along at a pace you could dance the Charleston too before a heavy, fuzzy guitar line kicks the door down to welcome in the chorus, full of "hey-ey-eys" and punk proclamations.

If Baz Luhrmann directed a Panic! musical, this would be the showstopper.

Briefly heard in the background of recent NFL game highlights, this is a stadium anthem in waiting, reminiscent of Fall Out Boy's recent material, almost acting as a heavier take on their sports anthem "Centuries" with Panic's trademark theatricality intact. Lyrically, it looks back on the life of an ageing protagonist, some good times behind him but confident of the future, perhaps making a nod to the journey and changes the band have gone through over the years.

Time can never break your heart but it'll take the pain away/Right now our future's certain, I won't let it fade away.

Probably the most straight-forward rock song here, expect this one to be the big show closer when the tour begins, the final chorus in particular crying out for a confetti canon moment.

Like taking a joy ride through the streets of California at midnight on a summer's evening, this banger is sweet enough to rot your teeth and definitely the poppiest moment on the record. Will be an undeniable live highlight as well as making for a great soundtrack next time you're playing GTA.

9) The Good, The Bad And The Dirty

A mid-tempo, horn heavy number with a few electronic twists and a beat reminiscent of "Miss Jackson", this pairs well with "Victorious" on any gym playlist with it's talk of street brawls and taking on all-comers.

If you wanna start a fight, you better throw the first punch/Make it a good one.

The Good, The Bad And The Dirty

Side note - the good, the bad and the dirty are also the names of the three piles Brendon separates his shirts into before he doesn't wear them.

Futuristic electro bleeps introduce this chest-beating sing along which will also no doubt be used in a great deal of sports footage through the year. Following the arena friendly trajectory of "Golden Days", we get a sudden shift in tone at the 2m mark as the house of memories turns into a house of horrors, an "Intermission"-esque piano line dropping in and altering the mood.

Those thoughts of past lovers, they'll always haunt me/I wish I could believe you never wronged me.

Upbeat yet ominous, the closing refrain feels like a Panic! take on The Nightmare Before Christmas that would work in a Halloween-themed double single with "Emperor's New Clothes".

For the closer, Brendon taps once again into his Sinatra vocal style as well as the more down tempo work of Queen who's "Bohemian Rhapsody" he has regularly covered on tour. Opening on piano and echoey vocals, this sombre, bittersweet ballad sees him in a reflective mood, eulogising a failed relationship made of "heartache and heartbreak, and gin made of tears". A full orchestra provides support with a rather beautiful instrumental solo in the middle eight to carry us home before Brendon leaves us hanging on an unresolved minor note.

There's no sunshine, there's no you and me/There's no good times, this impossible year.

We think he may well be wrong on that one.

So, there you have it. Death Of A Bachelor is out on January 15th and fans will find elements from each of the band's previous releases among the new tracks; this certainly feels like a culmination of all the previous experimenting, providing their most cohesive and, dare I say it, most musically satisfying album to date.

Now, bring on the tour!

10 Live Panic! At The Disco Performances That Will Melt Your Brain 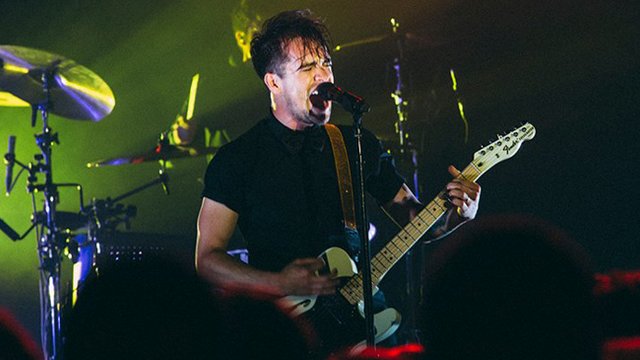