Is Bill Nye the Science Guy actually Brendon's Dad? Who would tell the Panic! "Drunk History"? And why is he always topless?

We got the answers to all these questions and more when we chatted to Panic! At The Disco main man Brendon Urie as he hangs out in London ahead of this week's Brixton Academy show and the imminent release of fifth album Death Of A Bachelor.

As we've already written, it's a very good album so we had plenty to talk about. Here's what went down when Panic! met PopBuzz.

PB: All good. So, let's start with the new album - when was the last time you were “not as think as you drunk I am”?
BU: Last night actually I got pretty hammered. We were by our hotel actually in London, where I'm currently at.

PB: Nice. So the album's called Death Of A Bachelor, is it about you wanting to kill off the TV show The Bachelor?
BU: (laughs) You know what, I'm gonna start saying that 'cause that's a way better answer.

PB: Oh ok what's the real answer then?
BU: The real answer is I wanted to talk about, ya know, who I've become now and that's what these songs are on the album and it's kind of a look back into the past at who I used to be and being grateful that I'm not that person anymore, and that I'm able to move forward.

PB: You've talked a lot about the Sinatra influence on the record, who do you think would be in your pop punk ratpack?
BU: (laughs) Um, that's a tough one. I'd say probably me, Pete from Fall Out Boy, probably get Gabe Saporta just 'cause why not? And, who else? If I could have The Weeknd in my rat pack that would be pretty dope.

PB: I would love to hear The Weeknd do that style of music, he has got the smoothest voice in pop.
BU: (laughs) Oh totally, he's great

PB: One of my favourite tracks on the album is "Crazy=Genius".
BU: Oh thanks.

PB: Also, total Panic! nerd question - was there any influence of "There's A Reason These Tables Are Numbered..." on that track? 'Cause they almost sound like companion pieces.
BU: Oh that's awesome. No, i mean I've always been a fan of jazz, like even on the first album when we did "These Tables Are Numbered", because that's kinda where I came from, I learned jazz just playing drums in a jazz band so I had a love for it and an infinity for, like, Sinatra and stuff so it really just came from that love of that world.

PB: Can you describe "Victorious" in one word that isn't victorious?
BU: Triumphant.

PB: Can you describe "Hallelujah" in one word that isn't hallelujah?
BU: Salvation.

PB: Kinda similar but I like it.
BU: Yeah, it's similar.

PB: When was the last time you saw something and thought "things are shaping up to be pretty odd"?
BU: (laughs) Last night we saw this guy playing in the hotel and it was pretty hilarious and I was just like, huh, that is fairly odd.

PB: What was so hilarious about it?
BU: It was just very strange what he was doing. It wasn't really songs it was just kind of noise, ya know?

PB: Good title. You famously write sins not tragedies, what else don’t you write?
BU: (laughs) I don't write a lot of fiction, most of my stuff is non-fiction so you can probably add that to the list.

PB: I think I heard you do a cover of that years ago, you should bring it back live.
BU: Yeah, yeah, that was fun.

PB: What about your favourite cereal?
BU: Ooh, right now, it kinda changes, it's either Cinnamon Toast Crunch or Golden Grahams. I like Golden Grahams.

PB: What does Patrick Stump keep under his hat?
BU: (laughs) He keeps a lot of different items under his hat, he keeps like a bouquet of flowers sometimes, he keeps bowties under there in case he ever needs a bow tie. I've seen him keep socks under there.

PB: Awesome. Now we are slightly concerned about you Brendon because you are always topless - is it just because you hate shirts or does it get too warm on stage?
BU: Yeah I do hate t-shirts. I hate wearing clothing, any excuse to get naked honestly is good enough.

PB: We just don't want you to catch a cold.
BU: Aww fair enough I appreciate that, thank you (laughs).

PB: Is it a fresh shirt every night or are you just picking up that same sweaty one at the next show?
BU: I wish I could say it's a different shirt but I have a uniform for onstage, it's my uniform, it's the same shirt and it smells like...oh my god, it's terrible.

PB: Have you ever gone to do the backflip and thought you might miss?
BU: Yeah I actually missed it, kinda one time. I was doing a set with my buddy Dillon Francis, we were at Reading and Leeds and I went to do it off this, like, one inch low rise that he was on and did the backflip. And I landed on my feet but then just immediately fell forward so awkwardly and just got up and I was dying laughing. It was a good time. But I missed the mark on that one.

PB: But it's not put you off, you still do it every night so fair play.
BU: Oh yeah, I'm totally doing it.

PB: Ok, I've got some internet questions for you - what's your favourite meme?
BU: Ooh, that is tough. I'm a fan of the Pepe one, the Pepe frog, that one's pretty funny. It just looks so sad.

PB: I saw you got given a Pepe t shirt on stage right? You worn that yet?
BU: I did, yeah I got a t shirt with Pepe on it. Yeah, I try to keep all the gifts.

PB: Do you have a fave meme of yourself? There's loads out there...
BU: (laughs) There's a couple actually. There's one I really like where it's me kinda like the Dos Equis guy, the most interesting man in the world, and it says "I don't often panic but when I do it's at the disco." And it's me like holding a glass and cheers-ing to camera.

BU: And the other one that's good too is me in the "I Write Sins" outfit and someone says "love is an open door" and then it's just me with that evil face on. PB: Good choices. Also, on behalf of the internet, is Bill Nye The Science Guy your actual Dad?
BU: (laughs) No, we're actually the same, we figured out time-travel. I am Bill Nye. I'm actually Bill Nye. I just travelled back so there's younger me and older me.

PB: That's a revelation! If you were gonna do a drunk history of PATD!, who would you want sat in the chair telling the story?
BU: I want Pete to do it 'cause he got me so hammered drunk I don't remember anything, I don't recognise that person. So I'd like Pete to get as hammered as I was and try to tell the story of Panic!

PB: Who's got the best soul voice - you or Patrick?
BU: Aww I've got to give it Patrick, he's a phenomenal singer. He's great.

PB: You did the Thanksgiving parade with the Ninja Turtles - do you have a favourite one?
BU: I always say Michael-Angelo, he's my dude. He was my favourite when I was a kid and, I dunno, I just always liked his attitude.

PB: Lastly, can you sum up the new album in three emojis?
BU: Ok - the bicep flexing, the fireworks and the eggplant. 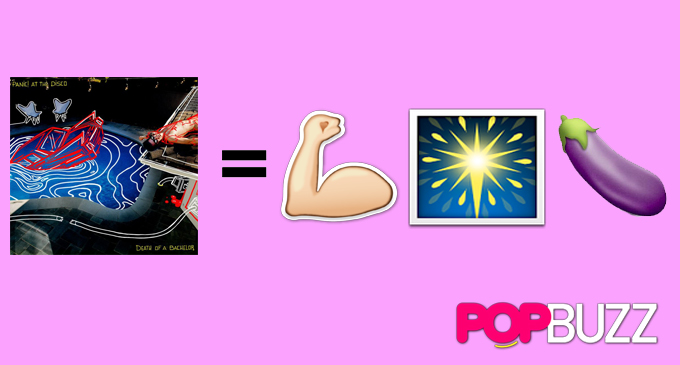 PB: That's the perfect choices. Thanks so much for speaking to us Brendon.
BU: Awesome, I appreciate it.

Brendon Urie ladies and gentlemen. We'll be at the Brixton gig so expect a full report on that very soon.