11 Times Brendon Urie, Matty Healy, And Other Artists Got Real About Living With Anxiety In 2016 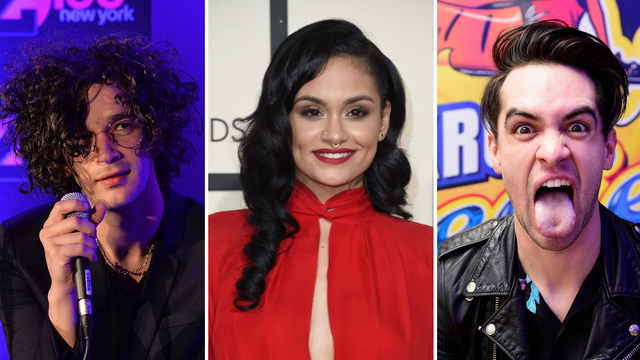 "Yes, I am mentally ill. I'm not embarrassed about it."

If it feels like people were talking about anxiety more than ever this year, don't worry, you aren't imagining things. This year, instead of being secretive, evasive, and vague about mysterious illnesses, we were blessed with a refreshing number of celebrities and big names opening up about their struggles with mental health.

When I was in One Direction, my anxiety issues were huge but, within the safety net of the band, they were at least manageable. As a solo performer, I felt much more exposed, and the psychological stress of performing had just gotten to be too much for me to handle

When Zayn released Mind of Mine, people assumed that he was going to follow the trajectory of other ex-boybanders gone solo. But, as the year wore on, it became apparent that plans to tour the album or do much promo for it were being hampered by something mysterious at play. Noticing that the narrative was getting away from him, Zayn opened up about his struggle with "psychological stress" and the anxiety of solo performing.

I was having terrible anxiety, nonstop. My heart would beat really fast the whole day. Two hours after I woke up, I'd need a nap because my body was so hyperactive... I was scared of what would happen to me, of the things my brain might tell me. I realized the stuff I thought was important isn't worth my health. Now I write in a diary every day, work out and meditate.

As many of you know, around a year ago I revealed that I have lupus, an illness that can affect people in different ways. I've discovered that anxiety, panic attacks and depression can be side effects of lupus, which can present their own challenges.

Last year, Selena Gomez was diagnosed with Lupus and even underwent chemotherapy to treat the condition. Selena recently revealed that the stress of the diagnoses (along with releasing and touring and album) made her want to slow down and take some time for herself.

You can’t tell somebody not to be anxious the same way you can’t tell somebody to be hungry – if you’re hungry, you’re hungry. It’s not something you can think your way out of, I would just say that you’re not the only person who feels like that but the problem with anxiety and social anxiety is that it makes you feel like you’re the only person in the world [that feels that way].

I want to say that, yes, I am mentally ill. I’m not embarrassed about it. And I have written my best work not when flirting with the brink, but when treating my chronic health problem with consistency and care.

John Green, writer of The Fault In Our Stars and Paper Towns has lived with anxiety and OCD for 20 years. Earlier this year, he shared his experiences of having invasive thoughts, anxiety, and the myth of creativity and "madness".

You would never tell on the surface but inside it’s so painful I can’t even describe… I start thinking of ways to take myself out! I can go to festivals and open spaces, but if I’m in a crammed room with a bunch of people, oh my god.

Brendon Urie Opens Up About "Painful" Anxiety In Emotional Interview

Josh Dun's Sister Ashley Launches Project Which Deals With Anxiety, Depression, And Everything In Between

I openly admit to having battled depression and anxiety and I think a lot of people do. I think it’s better when we all say: ‘Cheers!’ And ‘fess up to it. After anxiety brought on by cyberbullying sidelined Kehlani at the start of 2016, she made sure not to shy away from speaking on her experience with depression. She wrote about it in her music, talked about it at concerts, and was totally honest with fans about what she went through.

The more you talk about mental illness, the less of a taboo it becomes. As a pop star, I can say, ‘Hey, I’ve got bipolar disorder — it’s nothing that anyone can be ashamed of.

There was a point where I was nervous to go out on my own. It's not like you've gone into a Hollywood film where your biggest dream is coming true. It's something that happened because of a hobby and along the way you have to get used to this new lifestyle you have.

For me, depression is not sadness. It’s not having a bad day and needing a hug. It gave me a complete and utter sense of isolation and loneliness. [...] I felt worthless, like I had nothing to offer, like I was a failure. [...] It’s important for me to be candid about this so people in a similar situation can realize that they are not worthless and that they do have something to offer. We all do.