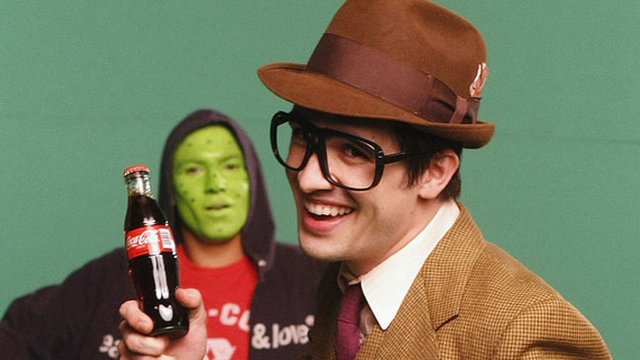 Why is noone selling pizza?

We're not naieve - we know that everyone's gotta eat. So it comes as no surprise when we turn on the TV and spot some of our favourite pop punk bands advertising whatever product they can get their hands on. Let's take a look at some of the weird and wonderful endorsements rock stars have taken on.

Tom, Mark and Travis have dipped their toe into commercials a couple of times, "All The Small Things" being a favourite of advertising execs everywhere and, most recently, appearing in these ads for HTC:

A music themed ad here for Rhapsody featuring a lot of in-jokes and references to the boys entire career. See how many you can spot.

And here's a very cool 8-bit performance of "Holiday" for Yahoo.

Patrick and co appeared in this good natured spot for DoSomething.org, complete with outtakes:

And more recently, they allowed "Irresistible" to feature in the Victoria's Secret Superbowl promo:

Panic have had a fruitful relationship with Coke, allowing "Ready To Go" to feature in these Diet Coke spots....

...and Brendon performing the catchy song "Open Happiness" for their ad campaign alongside Janelle Monae and Cee-Lo.

The newly reunited band got the sweetest deal of all, making this fun commercial for Donkey Kong.

Finally, Jack from ATL grabbed some free hats when he plugged New Era for Hurley a few years ago.

We guess pop punk just sells! Although we think the obvious endorsement has been missed...