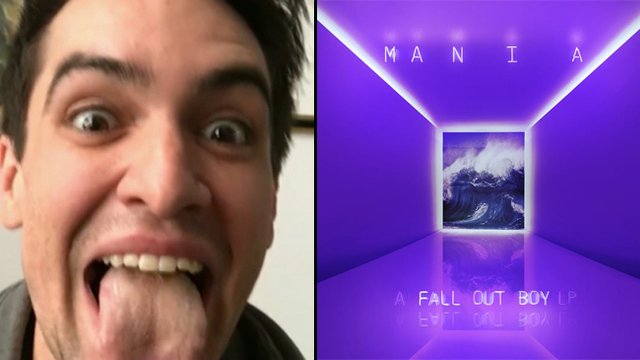 We asked the Panic! At The Disco frontman flat out whether or not he is on the album. And his answer is, um, interesting...

It's (sort of) official - Brendon Urie *might* be on the new Fall Out Boy album!

The Panic! At The Disco frontman called into the studio for this week's PopBuzz Podcast to talk through his upcoming role in Broadway musical 'Kinky Boots', the next Panic! record and even tried out his English accent.

Plus, we of course had to ask him all about filming his recent preview video for Fall Out Boy's 'Young & Menace', dressing up as a purple llama to eat some cereal.

Turns out Brendon was as mystified by Pete Wentz's strange costume request as we were:

"I didn't get any explanation. He said 'hey man, I'm sending our buddy Jade over to film you'. I said ok. I had no idea what it was gonna be. I had just seen the video like the day before...He threw the stuff onto me...and he said 'eat your cereal'. That was it."

But what about the album? Will Brendon be making an appearance on MANIA?

"I'm not divulging any information. I may or may not you know, it's up in the air right now...It's not a hard no."

WHAT THE HELL DOES THAT MEAN BRENDON?!! THE SUSPENSE IS KILLING US!!!!

Check out our full interview with Brendon Urie on this week's PopBuzz Podcast. Subscribe on iTunes here or click the link below: