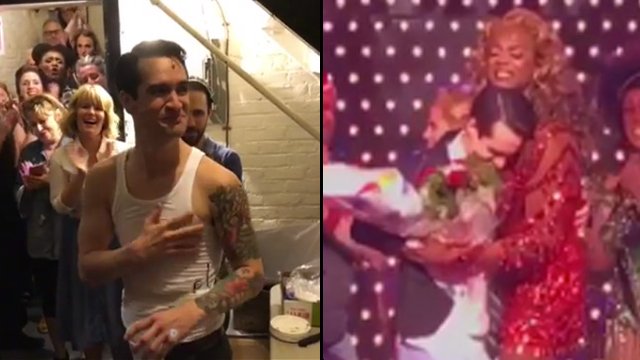 The Panic! At The Disco frontman celebrated his final Broadway weekend in style with Josh Dun stopping by and a cast party singalong.

Panic! At The Disco frontman Brendon Urie wrapped up his summer run in Kinky Boots this past weekend (August 6th) as he closed out his Broadway debut in the lead role of Charlie Price.

Brendon has been getting rave reviews and attracting huge crowds to check out his first major acting role and he's made no secret about how much he's enjoyed it all so, understandably, it was a pretty emotional weekend.

First up, on Saturday night, his old buddy Josh Dun showed up to check out his penultimate performance:

When you host #SNOB in @brendonurie 's dressing room things can get crazy. #SNOB means Saturday Night On Broadway. It's a tradition to party after a show in someone's dressing room and tonight Brendon hosted cause he finishes his Broadway run tomorrow.

Then, as he took his final bow, he was handed flowers and got even louder screams from the crowd than normal:

Finally, the cast all gathered together backstage to serenade Brendon with the traditional leaving tune 'Happy Trails', the singer giving a brief speech to his new friends over some cake and beer:

Happy Trails.. i can say without a doubt I will miss this family so much. It's been a once in a lifetime experience. Thank you

Congrats Brendon, come over to the West End soon please!

He made those high heels work – and then some! #KinkyBoots pic.twitter.com/wcywBV58XQ

Brendon is set to return to work on the next Panic! At The Disco album shortly.

Check out some of our chat with him as he entered rehearsals for Kinky Boots earlier this summer: