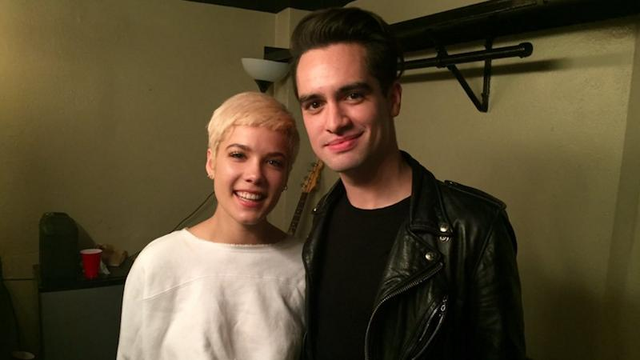 The singers contributed heartfelt essays to a new 'love letters' project that celebrated their own fandoms as well as the community at large.

Panic! At The Disco's Brendon Urie and Halsey are among the artists who have penned open letters to mark Pride Month.

Brendon's letter makes reference to the 'Girls/Girls/Boys' fan project that took place during the recent US leg of the 'Death Of A Bachelor' tour:

"The last tour we just finished was the most inspiring I've ever been a part of. During "Girls/Girls/Boys" fans would hold up brightly colored paper hearts against their phone lights to show their support of a community they may or may not have even been a part of. But this showed me that we ARE a part of the same community: Human beings."

Halsey's letter also paid tribute to her fans as vowed to continue to express the importance of celebrating the LGBTQ community in her music:

"And so I shout it. As loud as I can. In my lyrics. In my art. In a rainbow flag waving across thousands of pixels across my stage. I shout it in the faces of the oppressors and I shout it hand in hand with both my beautiful young fans, and the queer folk that I look up to everyday."

Check out the full selection of letters over at Billboard here.

Brendon and Halsey are longtime friends having previously performed together during the latters Coachella festival set in 2016. We recently asked Brendon about the possibility of a future collab with the singer and he said that discussions have indeed taken place.

Watch our full interview with Brendon in the video below: