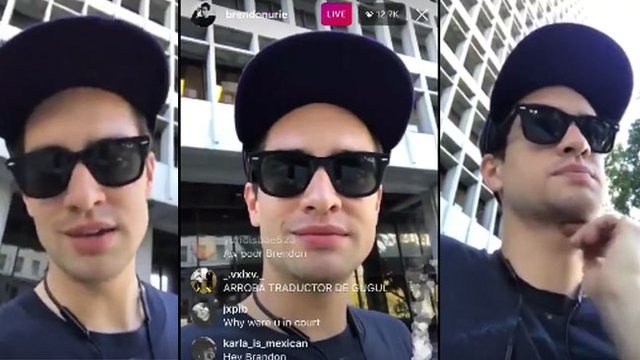 The Panic! frontman posted an Instagram update to fans from outside the courthouse as the ten day trial comes to a close.

Brendon Urie has revealed to his Instagram followers that he has spent the last ten days in one of the more unlikely positions you'd expect from a major rockstar - serving as a jury member on a criminal trial.

The Panic! At The Disco frontman, currently hard at work on his sixth studio album, has been posting regular updates from the studio via a series of Instagram Live videos. Normally these just consist of a casual chat with fans and a smoke but yesterday (October 26th), Brendon was finally legally able to talk about his experience in the courtroom.

Chatting as he waited for a Lyft outside the courthouse, Brendon expressed his dismay that the session ended in a mistrial after one person out of the group of twelve couldn't agree that the accused was guilty of their crime.

Check out what he had to say about the trial in the video below, captured by fan Robin Ross on YouTube:

Jury duty - apparently even emo icons can't get out of it!

Meanwhile, Brendon's recent contribution to the soundtrack of Broadway's Spongebob Squarepants musical, 'Just A Simple Sponge', is now available for streaming as part of the soundtrack.

Check out Brendon talking us through the track, and even singing a short excerpt, in the clip below: