WATCH: Brendon Urie Tries On His 'Kinky Boots' Costume For The First Time 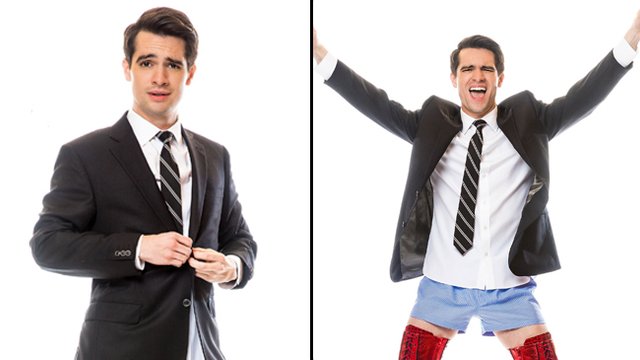 The Panic! frontman joins the cast in New York from May 6th.

People magazine have given us our first look at Brendon Urie in his full Kinky Boots costume.

Brendon is currently in the midst of rehearsals in New York ahead of his opening night performance on May 26th but he took some quick time out from learning lines for a photo shoot in those infamous glitzy heels:

Check back later this week for our FULL INTERVIEW with Brendon about all things Kinky Boots on the PopBuzz Podcast.

What did we ask @brendonurie to make him do these faces we hear you ask?!
Find out SOON on the PopBuzz podcasthttps://t.co/guUFF55LGn pic.twitter.com/wKKHNl17HB

In the meantime check out some behind the scenes footage of Brendon's photoshoot in the video below:

Panic! At The Disco frontman Brendon Urie is set to star in the Broadway production of Kinky Boots and now we have the first TV commercial publicising the run.

Brendon will take on the role of Charlie Price beginning May 26th at the Hirschfield Theater until August 6th, announcing the move in a video message via Twitter earlier this month:

"It's a familiar thing, I guess, but it’s such a different world. I'm so excited to jump in...This is a step in an exciting direction for me because I've always dreamed of being a part of Broadway in some way."

We'll bring you all the latest pics and clips of Brendon donning those famous high heels as soon as we get them! Get your tickets to see Brendon in the show here.

Check out the first TV commercial for Brendon's Broadway run below: