Wait...Is Brendon Urie On The New Fall Out Boy Album? 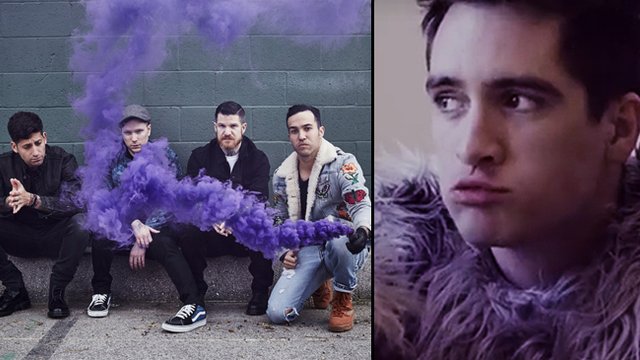 Does the Panic! frontman's cheeky teaser video mean a '20 Dollar Nose Bleed' sequel is on the way?

Oh Pete Wentz - you really are a sneaky young man!

Pete and his fellow Fall Out Boy bandmates left the entire fandom shook on Friday (May 5th), posting a teaser video for their upcoming album Mania featuring an appearance by none other than Panic! At The Disco main man Brendon Urie.

Woke up on the wrong side of reality

there’s a madness that’s just coursing right through me..

They certainly know how to get our attention don't they?

Brendon is of course wearing one of the now infamous purple llama outfits from the music video for 'Young & Menace', leading many fans to speculate that we could be in for a Panic!-shaped cameo on the new album.

And, yeah, ok, a clip of Beebo eating cereal is far from confirmation of a collab, but try telling that to this lot:

Brendon, of course, provided guest vocals on the classic Folie A Deux album track '20 Dollar Nosebleed' so it is certainly not out of the realms of possibility that a second duet may appear on this new effort. No full tracklisting for Mania is yet available but hopefully we will find out a full list of collaborators before the release date of September 15th.

In the meantime, let's all turn up this absolute banger shall we?