Panic!'s DOAB Tour 2017: Everything You Need To Know 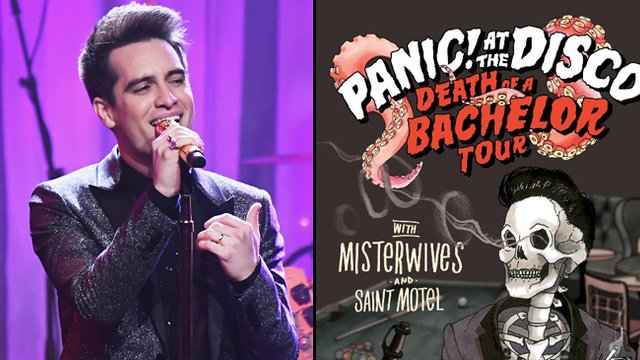 From setlists to support acts and surprises, we've got all the info you need on Brendon's latest lineup of concerts across America.

Panic! At The Disco have just begun their huge Death Of A Bachelor tour of the US, taking in arenas across the country through to April in support of their excellent 2016 album of the same name.

But what can you expect to see at these mega-shows? Don't worry, we got all the details for you right here so, even if you haven't got a ticket, you can still get all the highlights in the comfort of your own home.

The UK shows at the end of last year focused largely around newer material but Brendon has clearly decided to mix things up for these newer dates, bringing in some long forgotten classics as well as a few cheeky cover versions.

First up there's this medley of tracks from A Fever You Can't Sweat Out that takes you straight back to 2006:

'I Write Sins...' gets its own individual airing later. Obviously.

Plus, the band take on Billy Joel's 'Movin' Out' and give a live debut to their cover of The Weeknd's 'Starboy', first premiered on UK radio last year:

Seriously, this suits his voice so well that we are gonna need a full album of "Beebo does R'n'B".

Oh, and Brendon even gets a little drum solo to Bruno Mars' inescapable single '24K Magic'.

The truly excellent Misterwives and Saint Motel are warming up the crowd across the country. Misterwives' new album Connect The Dots is set to drop in May while Saint Motel released their second record Saintmotelevision last October.

3) Any surprises in store?

(Obviously, don't read on if you don't wanna know).

The mid-section of the show has a nifty little triple bill of surprises in store for the audience which are, in order...

1) Pete Wentz pops up in video form to do that whole cult leader thing from the 'LA Devotee' video.

2) Brendon then appears at a glittery piano in the middle of the floor for a solo take on 'This Is Gospel'.

3) He then makes his way back to the stage by walking straight through the crowd, hugging and posing for photos as he goes.

Needless to say, there's a lot of screaming throughout.

And if you are REALLY lucky, you might even get to a special guest, like when Noah Schnapp, aka Will from Stranger Things, turned up at New York's Madison Square Garden show for a run-through of 'LA Devotee'.

Still waiting for that Brendon cameo in season 2 tbh.

Relax - the boys are posting a new tour diary full of behind the scenes footage every week. Check them out below:

Check out our full interview with Brendon in London last year at the link below: