Did You Blink And Miss Panic! At The Macy's Parade? 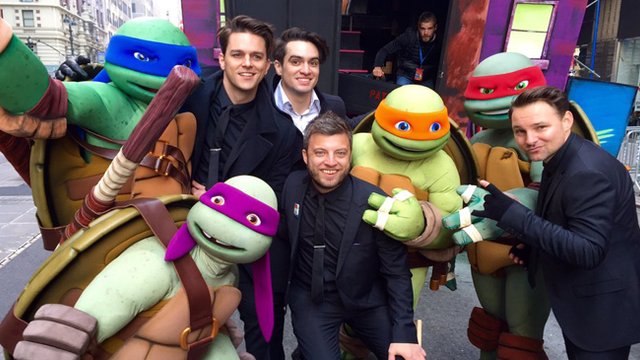 As we previously reported, Panic! performed at the annual Macy's Thanksgiving Parade in New York aboard the Teenage Mutant Ninja Turtles Float.

It's pizza time for these guys, turkey time for us. Happy thanksgiving! pic.twitter.com/ms9QwlMVyn

Here they are rehearsing before shirt-hating frontman Brendon Urie has a brief chat with a reporter.

Most clothing he's ever worn.

We were of course all very excited to see the performance of "Victorious". So we watched the whole parade show from 9am NYC time, waiting for them to appear.

And then we blinked and missed it.

Turns out we weren't alone:

Honestly so upset that I missed Panic! at the Disco on the Macy's Thanksgiving day parade

if you missed panic! at the disco on the macy's thanksgiving day parade it's probably because you blinked

Fortunately there are a few "fan-shot" (*phone in front of the TV*) versions on YouTube of the brief performance:

Even the person doing the subtitles was rushing:

Ah well, 30 seconds of Panic! is better than none at all right guys?

QUIZ: Which Topless Brendon Are You?