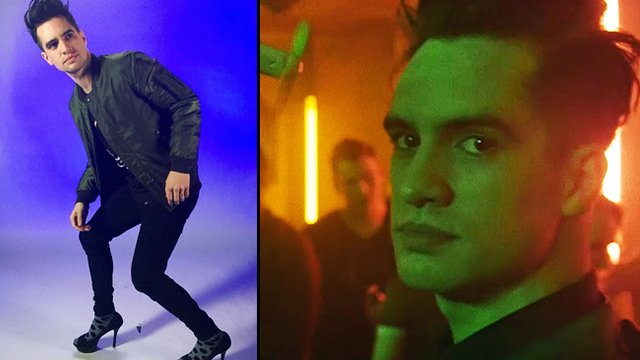 It was true all along - Panic! At The Disco's Brendon Urie really did lose a bet to a guy in a Chiffon skirt. And he made those high heels work!

Brendon was chatting to Coup De Main during his recent tour of Australia and New Zealand about the meanings behind some of his all-time favourite Panic! song lyrics, including the now infamous line from Death Of A Bachelor album track 'Don't Threaten Me With A Good Time'.

Turns out, it was based on a true story:

"I was in Hollywood and I went to a bar, there was a guy in a beautiful chiffon skirt - yes, I know what chiffon is! He was in a chiffon skirt and wearing high heels, he was in drag, I was like, 'Wow that’s amazing!' We ended up talking and hanging out for a little bit, he had said basically, "I challenge you to see who can fit more hot dogs in their mouth" - the bar had hot dogs. So he won, I lost immediately. I thought I was just going to win, I was like, 'Let me redeem myself, who can chug a beer faster?' I lost again, so that was embarrassing. He said, "Okay now, here comes the time for the bet, you have to put on these high heels." I had to wear them for the whole rest of the time I was at the bar - I was only there for another hour maybe. He didn’t make me stand in them all day because that would’ve probably just killed me, I was able to sit down, but I wore them and I pulled them off very well."

Note to self - never get into a beer chugging contest with a Hollywood drag queen. You will lose.

That heel work will definitely come in handy now that Brendon has been cast in the lead role in Broadway musical Kinky Boots, joining the production this May in New York for a run through till August.

me: i hate musicals

them: but brendon urie is in kinky boots!!11!

Just make sure you're not as think as you drunk I am when you are on stage Brendon!