Someone Made Panic! Themed 'Cards Against Humanity' & They're Savage 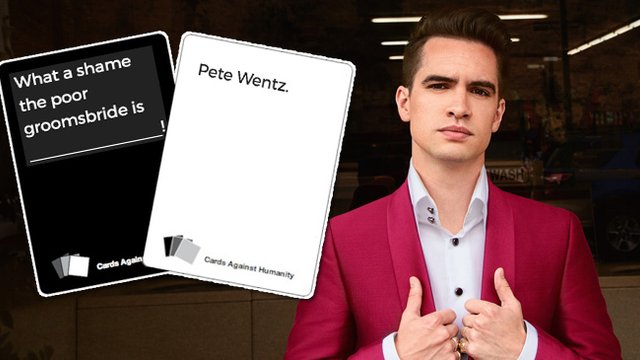 You can now buy your very own set of game cards all inspired by Brendon Urie himself.

One clever Panic! At The Disco fan has made what may be our fave piece of merch ever - a Panic!-themed edition of 'Cards Against Humanity'.

Reddit user celestialslumber posted about the game, entitled 'Cards! At The Disco', which they have created and put up for purchase on Card Cast, a website for homemade games. And the options in this version are just so good.

In case you don't know how the game works, everyone starts with a bunch of white cards and then the 'Card Czar' presents you with a black card. Then you use your white cards to fill in the gaps in the phrase to make the funniest, weirdest and most WTF sentence you can.

Just take a look at a few of the current cards included in the pack:

Our fave combos so far include 'Don't Threaten Me With Pete Wentz' and 'What a shame the poor groomsbride is Zach Hall'.

The creator explained the thinking behind the project on Reddit:

"This is a community effort--ive contributed the majority of the cards thus far, but if anybody's got any suggestions, let me know! ill add them in right away...also, i think im gonna start hosting some games! so either ill post them as separate posts or i'll put them in the comments. depends on when everybody is available/wants to play--if you know you'd like to play, it's helpful if u tell me when ur available! Thanks yall, hope this is fun for everybody!!!"

Plus, all money generated from the sales of the game go to Code Now, a non-profit organisation that helps underrepresented youth learn how to code.