Panic! At The Disco Fans Are Receiving Potatoes In The Mail 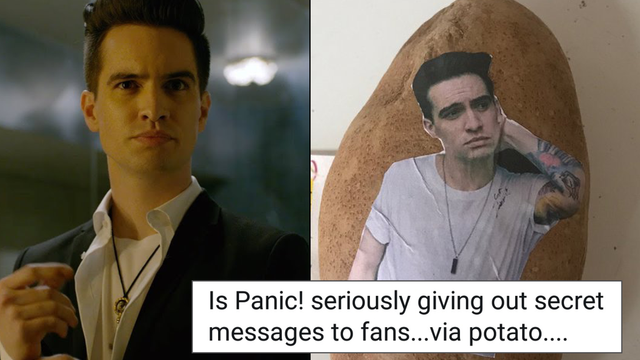 How SHOOK would you be if you received a potato with Brendon Urie's face on it?

The Panic! At The Disco fandom is having an eventful album roll out season. Between all the hints leading up to "Say Amen" (Saturday Night) & "(Fuck A) Silver Lining", plus the special holy water packages delivered straight to the mailboxes of loyal fans, there certainly has been "no rest" for the devout followers of Panic! At The Disco.

Imagine going to check your mail and discovering an actual potato with Brendon Urie's face on it.

The potatoes are directing people to mysterypotato.com, an anonymous potato sending site that we never even knew existed until this precise moment.

Is Panic! seriously giving out secret messages to fans...via potato....

.@brendonurie @PanicAtTheDisco is this part of pray for the wicked promo or was i just sent this random potato pic.twitter.com/y7cebD4aZi

@brendonurie @PanicAtTheDisco
what the actual fuh!? someone anonymous legit sent me a potato in the mail saying: pic.twitter.com/NOj3L6uNmQ

twenty one pilots: lets give our fans some really cryptic puzzles to solve to hold them over
panic! at the disco: lets send our fans POTATOES

But they definitely weren't mad at the concept

this is how i would keep my potato fresh — @brendonurie i’m still waiting pic.twitter.com/2byZTBVqGn

Of course, a few fans started wondering if their potatoes got lost in the mail.

when you don’t get a potato from brendon but you still luv him pic.twitter.com/fX8By5aqhp

how come panic at the disco out here sending their fans potatoes? how come i didn't get one? i'll stop making fun of brendon. forget the cryptic messages a sis trying to eat good.

But then the whole potato concept clicked.

Can't believe I didn't make the connection immediately, but just realized the potato idea must be from the Say Amen video!

Okay, so here is everything we know about the potatoes:

Panic! At The Disco fans have been receiving potatoes in the mail with "Say Amen" lyrics on them. The potato is a reference to this iconic scene from the lead single's music video.

Panic! are back at it again, following another viral marketing exercise in March, where people received holy water bottles labelled "Pray For The Wicked".

Pray For The Wicked, Panic's 6th studio album, will be out June 22. The official Panic! At The Disco account has responded and WHAT DOES IT ALL MEAN?!

That's all we know so far. We're also acutely aware that potatoes are a rich source of vitamin C and potassium.