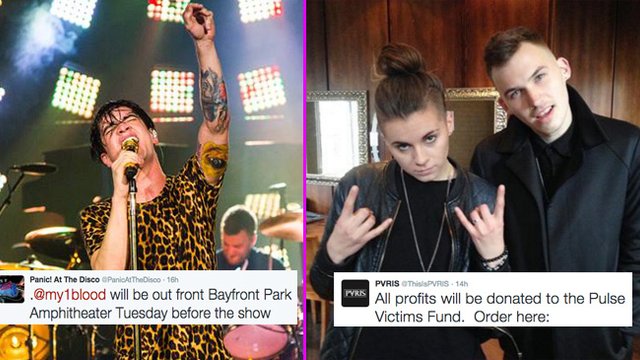 A blood drive has been set up before June 14th's Panic! show in Miami.

As more details emerge regarding the Pulse nightclub tragedy in Orlando this past weekend (June 11th), several high profile music acts have directed fans towards ways they can help the victims directly.

Panic! At The Disco play a joint headline show with Weezer in Miami today (June 14th) and have publicised a blood drive which will be set up outside the concert venue in the afternoon leading up to the show.

.@my1blood will be out front Bayfront Park Amphitheater Tuesday before the show from 3-7pm https://t.co/gbdIxakU8E pic.twitter.com/MIU0PwXsMo

Orlando hospitals have already called out for more blood donations to help the victims as videos of the lengthy lines of donors flooded Twitter with positivity and a sense of community yesterday.

The band added some details about the event on their official website and tumblr page.

One Blood (oneblood.org) will be out front of Bayfront Park Amphitheater on Tuesday before the show from 3-7pm… Must be 16 yr old need a signed parent consent. (Or a parent present) 17+ just need id. Must weigh at least 110lbs and be sober .

PVRIS have also released a limited edition T-Shirt to support Pulse victims, all profits going directly to the cause.

All profits will be donated to the Pulse Victims Fund. Order here: https://t.co/q0qfcvUItI pic.twitter.com/DpQL7SyNRt

The shirt is currently out of stock but keep an eye on the band's merch page here for updates on extra supplies.

Are you attending Panic!'s Miami show tonight? Let us know below.