WATCH: Panic! At The Disco Play Live With The Roots On "The Tonight Show With Jimmy Fallon" 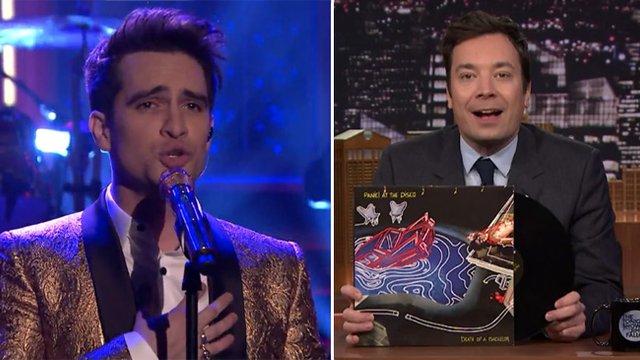 Brendon teams up with the legendary The Roots crew for a performance of 'Death Of A Bachelor'.

Panic! At The Disco played one of their biggest TV performances ever last night (January 19th), performing alongside The Roots on The Tonight Show With Jimmy Fallon.

Turn it up! @PanicAtTheDisco is performing "Death of a Bachelor" with a little help from @theroots! #FallonTonight pic.twitter.com/MfwN9coOLx

Brendon, in a particularly shiny gold jacket, busted through the soulful title track from the album "Death Of A Bachelor" which is currently nominated for a Best Rock Grammy award and, as Fallon himself pointed out, they "should win".

Damn right they should.

Clearly delighted to be there, Brendon tweeted his gratitude after the event, honoured to have got to work with the best band in late night TV.

You are all amazing. I was having an out of body experience during our performance, so thank you for letting me sing with y'all @theroots

Thank you so much @FallonTonight for your generosity and talent. Still haven't processed that I just sang with the roots. #FallonTonight

Bless him - he was just so damn happy to be there!

Panic! will soon kick off a brief tour of Australia and New Zealand before returning to the US alongside MisterWives and Saint Motel for the 'Death Of A Bachelor' Tour.

Watch Brendon's performance with The Roots below:

Plus, you can catch our full interview with the man himself in the clip below: