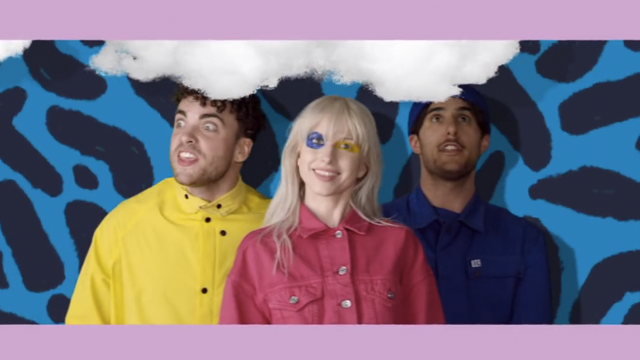 Hayley, Taylor and Zac's new single was heavily inspired by recent events in their personal and professional lives.

In case you somehow missed it, Paramore are well and truly BACK, dropping the shiny new video for their single 'Hard Times', taken from the upcoming album After Laughter.

Safe to say, it's an absolute banger!

Anyone else getting some Mario Kart vibes during the intro? No? Just us?

But despite the bright, poppy, summery nature of the music, lyrically the track comes from a much darker place, heavily inspired by the recent tumultuous period the band have endured since the release of 2013's self-titled album.

In a new profile with The New York Times, Hayley Williams has spoken out about how the departure of longtime bassist Jeremy Davis from the lineup took its toll on her:

"I prayed until my knees bled, pretty much...We were down another member — same old story almost from Day 1. It made me question everything — am I doing something wrong? You read things that people say about you and eventually you just think, ‘Oh, I must be some kind of diva bitch.’ I know that’s not me, but it caused a lot of self-doubt...I couldn’t imagine putting something on an album that says ‘life’s great, everything’s cool, party with me."

This doubt is what fuelled the concept behind 'Hard Times', in particular those hard hitting opening lines:

All that I want
is a hole in the ground
You can tell me when it’s all right
for me to come out.

The NYT also revealed that Jeremy's departure and the surrounding court case has inspired other lyrics within the album too, including the tracks 'Fake Happy', 'Grudges' and 'Forgiveness' which contains the sample lyric 'I just can't do it yet'.

But thankfully, with the return of original member Zac Farro to the lineup, the band are enjoying their time in the spotlight once again, Hayley even commenting that she is now appreciative of the difficulties that came before.

"This is what you go through hard times for, so you can have these moments where you’re proud of yourself, proud of your choices and your friends...I have a public diary of my life and I feel useful because of it."

Paramore's After Laughter is out on May 12th. They will also tour the UK and Europe this June which, we can all agree, is very exciting.