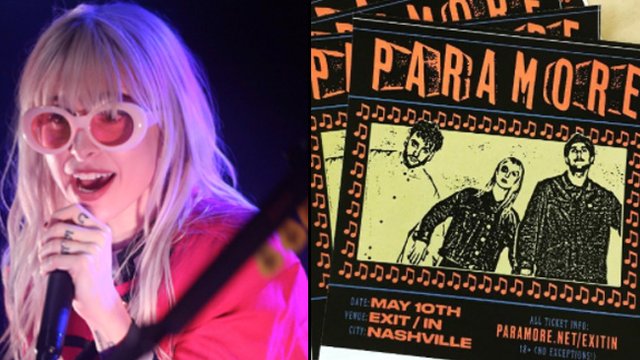 Hayley, Taylor and Zac returned to the stage in style with a tiny show in their hometown of Nashville.

Paramore returned to the live stage last night (May 10th) with an intimate show at Exit/In in their hometown of Nashville, celebrating the much anticipated release of their new (and very good) album After Laughter.

So, what went down at their first show in literally years? Don't worry, we got you covered...

1) The setlist was everything you want it to be.

Old songs. New songs. A cover of The Strokes (!). Hayley, Zac and Taylor are clearly enjoying getting back in to the swing of this whole 'being in a band' thing and this career-spanning mix of material bodes very well for their upcoming European tour dates.

2) They went all out with the extra touches for fans.

From a snazzy new Snapchat filter to a full record signing, the band were ready to give back to the lucky local fans in attendance.

They even changed up the sign outside to remind everyone that, yes, Zac is well and truly back

Check out a few video clips from the show below:

Paramore's After Laughter drops tomorrow (May 12th). You're gonna enjoy it.