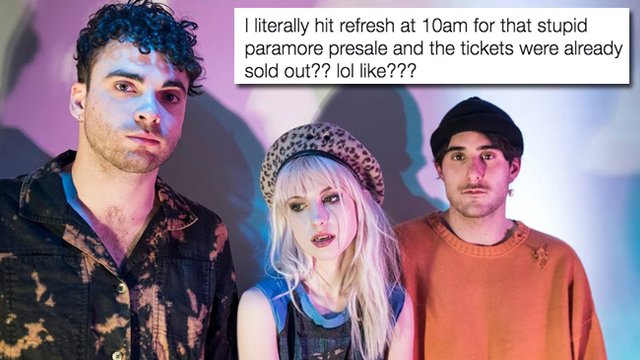 Hayley has responded to fans on social media after many tickets immediately ended up on resale websites.

Paramore have announced a new ticket sale for today (May 24th) at 10am local time for all shows on Tour 2, available to purchase exclusively in person at the venue box office. The band announced the move in a Facebook message to fans. Tickets will be limited to two per person.

Paramore have apologised to fans after the presale for their US tour sold out in moments, leaving many fans frustrated on social media.

Sign up for the Ticketmaster Verified Fan presale. Please note: not every fan that registers will be sent a code. https://t.co/S3uDBwitD7 pic.twitter.com/MoL5FKtiOL

The band put the tickets on sale via Ticketmaster's 'Verified Fan' program whereby users preregister and receive a code to access tickets, limiting the amount of bots and scalpers able to buy up seats at a quick speed.

However, as many users pointed out, tickets to many Paramore shows sold out in record time and immediately began appearing on resale sites for much higher prices:

.@Ticketmaster Thank god you did this Paramore "Verified Fan Presale" to make sure the tickets didn't all get bought up by resellers! pic.twitter.com/T0iMqHPn41

And, understandably, the fans were pretty unhappy about it:

I literally hit refresh at 10am for that stupid paramore presale and the tickets were already sold out?? lol like??? pic.twitter.com/vPX1wwarJT

The first round of presale tix for #paramore tickets was disappointing tho amirite folks? pic.twitter.com/n7sO5miAhs

ticketmaster: sign up for Paramore presale fancode
also ticketmaster: no pit tickets tho
me: pic.twitter.com/jPVP2cq4lP

Fortunately, Hayley has come to the rescue, tweeting that the band are in discussion with their manager about how to rectify the situation moving forward.

She even had the perfect GIF ready for the occasion:

to whom it may concern: talking to our manager & booking about how to deal with this bs presale for our US tour. pic.twitter.com/iRKrNDtTAP

Don't worry guys, it's being handled.

We'll bring you any updates on ticket details for the Paramore tour as they are announced. You can view the complete list of summer US dates below: