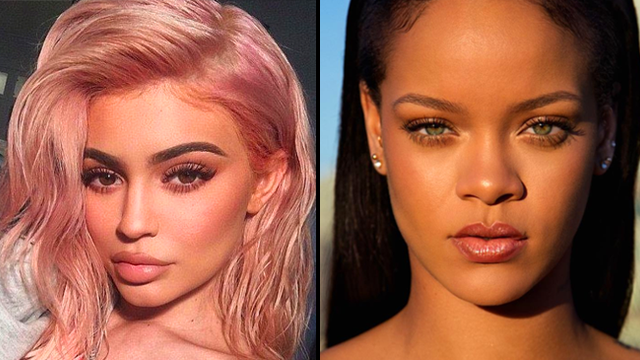 Rihanna's brand new beauty collection, Fenty Beauty, dropped last week and has been selling out, making history and blowing people's minds ever since. It is now a known FACT that Fenty Beauty is the best range of beauty products OF ALL TIME.

But there now seems to be a little bit of shady rivalry kicking off between Rih and her new beauty competitor, Miss Kylie Jenner. Rihanna's inclusive collection, which includes 40 shades of cruelty-free foundation suitable for all skin tones, is a HUGE deal and has the potential to leave Kylie's multi-million dollar beauty collection behind in the dust.

So when Kylie (who is probably shaking right now) and her Kylie Cosmetics account dropped a brand new 'Kylighter' product in the middle of the online meltdown everyone was having over the majesty of Rihanna's new line, the Navy couldn't help but call her out on it.

the only thing u were good at is now over pic.twitter.com/zlDBqyXVLU

Pack your bags sis Rihanna is gonna take over from here

To add even MORE fuel to the fire, it's been reported that Kylie has even gone and unfollowed Rihanna on Instagram soon after Fenty Beauty dropped.

Kylie's beauty empire is already a huge success as it is. It was revealed back in August that Kylie had earned over $420 million in the past 18 months and her limited edition 'Birthday' set amassed $10m alone.

As for pitting the two brands, and their respective owners, against each other... why can't we just let both women succeed? Whether you love or hate Kylie, she's created a JUGGERNAUT of a beauty collection. And we're 100% sure Rihanna will do the same - maybe even better, who knows. Honestly, there's space for both of them in their respective lanes.

Although, the second Kylie sneakily adds more inclusive shades and colours to suit a variety of skin tones to her collection, we all know what's going to happen on Twitter...