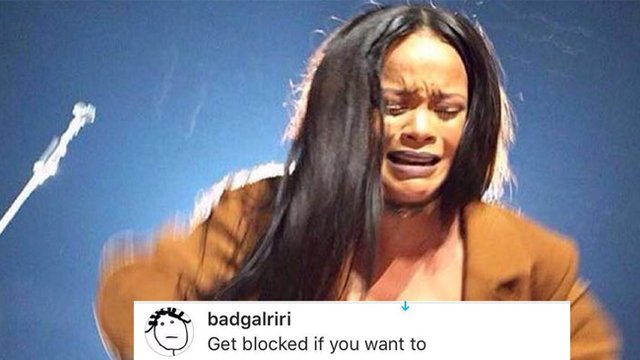 We all know the drill by now: a troll posts a sexist comment or meme about a female pop star, people get outraged, artist calls out trolls, a million articles are written about it and every one goes home happy knowing they’ve shut down people being gross.

At least, that’s how it’s supposed to go down. It’s a little different with Rihanna.

Our favourite bad gal took to Instagram to respond to a fairly disgusting meme made from a live shot at one of her recent shows on the 'ANTI' world tour. Here's the offending image.

Rihanna's response, at first, seemed like a serious clap back. "Get blocked if you want to" sounds like a pretty damning response, right? Well, not necessarily.

As many fans have pointed out, Riri has a pretty twisted sense of humour herself and she often jokes about blocking people when she comes across a meme that she thinks is funny. A quick scan of the Rih Replies Instagram feed supports this assertion.

The person who initially posted the meme later defended it in another post, saying that Rihanna still follows their account on Twitter and the meme was in keeping with Rihanna's humour. 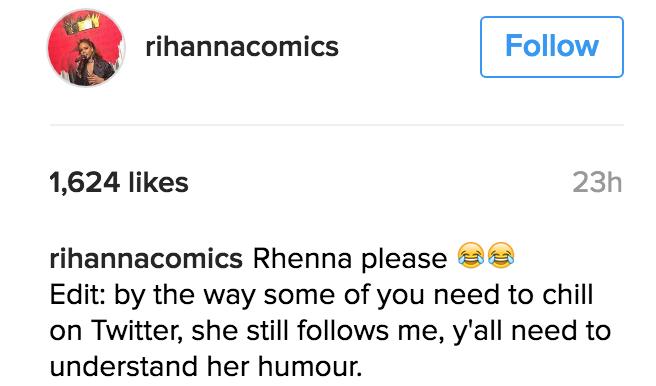 Rihanna then commented on another post of the same image, commenting "But I just can't"...waits for the crowd to sing "APOLOGIZE" while posing for this dreadful photo!"

So it would kinda appear that she didn't mind the picture that much if she keeps commenting on it? At the very least, she see's the funny side of a bad picture.

A little further digging revealed that she has in fact made the same joke about HERSELF in a comment on another picture!

So maybe Rihanna was just messing when she said she would block the fan after all.

But even if Rihanna doesn't mind, we’d still say that making memes like this one isn't cool. Firstly they perpetuate the idea of women as sex objects (you don't seen memes like this about guys!) and, secondly, it’s not even that funny or original! These trolls need some new material, fast.

Do you think the meme went too far? Let us know in the comments. 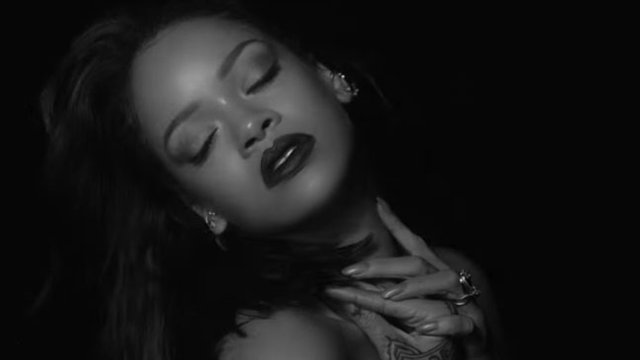