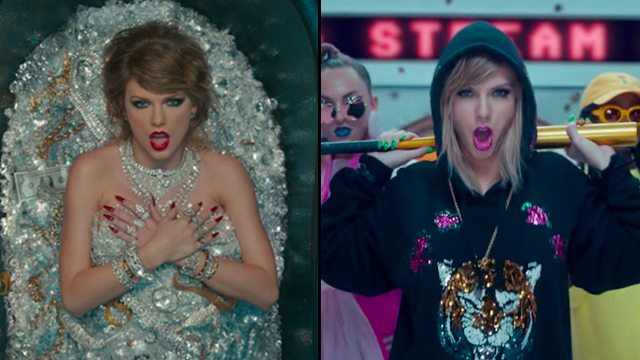 Queen of subtle self references.

The video for New Taylor Swift's 'Look What You Made Me Do' dropped during the MTV VMAs on Sunday (Aug 27) and a lot of people had a LOT of feelings about it. But while the song hasn't exactly blown the minds of the the majority of the public, the attention to detail in the video has done more than enough to make up for it.

Taylor has painstakingly referenced almost every single part of her career in the video, from the huge scandals to the tiny minute details and news stories that broke over the past 10 years. How many did you spot the first time around? We bet you didn't manage to notice even HALF of the ones on this list.

1) Nils Sjoberg is written on one of the headstones in the graveyard. In case you've forgotten, that was Taylor's secret pseudonym when she wrote 'This Is What You Came For' for Calvin Harris.

2) There's one single dollar note in the bathtub with Taylor and all her diamonds... that's how much she won when she countersued the DJ who was found guilty of lifting Taylor's skirt at a meet and greet. While he sued her for $4m, she countersued for $1.

3) The jewellery on the floor to the left of her spells out 'No' too.

There is only one single dollar bill in the bath-tub. #LWYMMDVideo pic.twitter.com/g9xYeNKGpB

4) Some people have also linked the scene in the bathtub covered in diamonds to Kim Kardashian's terrifying robbery in Paris where she was gagged, bound and put in the bathtub. Taylor later puts a diamond choker in her mouth like a gag. But it's most likely a reference to this speech she made about lying in a bathtub surrounded by pearls.

before this spreads any further Taylor swift being in a bathtub filled with diamonds has nothing to do with Kim #vmas #LWYMDvideo pic.twitter.com/acs0wrK4Xu

5) The army of almost identical plastic supermodel squad members who all behave the same is a dig at the media for calling her out on her 'perfect girl squad cult'.

6) The names written on the shirt of 'You Belong With Me' Taylor's t-shirt have been replaced with the names of the friends who have remained the most loyal to her.

The names on the Junior Jewels shirt changed from YBWM video. Some speculate the names represent those who stuck with her  #LWYMMDvideo pic.twitter.com/DY6hAik1rC

7) The 'I Heart T.S.' cropped t-shirts from the infamous Tom Hiddleston Fourth of July party make an appearance on the back up dancers.

8) And the 8 backup dancers in the scene are meant to symbolise her eight exes.

How many dancers? 8. Because she's had 8 exes. pic.twitter.com/PcYXTqtg90

9) "Et tu Brute" is written on the pillars and the arm rests of Taylor's throne. "You too, Brutus?" refers to the betrayal of a friend who stabbed Caesar in the back. Brutus in this situation could be everyone who's ever betrayed Taylor. But it's also a low-key Mean Girls reference so it's probably referring to Katy Perry.

"Et tu, Brute?" "Even you, Brutus?" this was the phrase Julius Cesar said when he realised his friend back stabbed him. pic.twitter.com/ZbhqsJMmNj

10) The throne visual could also be a reference to Kanye's Watch The Throne album with Jay Z.

11) The 'Taylor' dressed in leopard print with the leopard on a leash is a reference to Katy Perry circa 'Roar'... and she's holding the one thing Katy doesn't have. A Grammy.

IS THIS SHADE AT #KatyPerry CAUSE SHE LOOKS LIKE KATY BUT SHE IS HOLDING A GRAMMY AN KATY DOESN'T HAVE THAT YET!! #LWYMMDvideo #VMAs #VMA pic.twitter.com/j2SsSOloGd

12) When Taylor says "What's with that bitch?" and OOTW Taylor replies with "Don't call me that!", that's a direct reference to the infamous lyrics on Kanye's 'Famous' where he says "I made that bitch famous." That was also the lyric Taylor had urged Kanye not to use.

13) The scene where she's swinging from her gilded cage is another drag on her white privilege, sipping on champagne and eating lobster without paying attention or caring about what's happening in the real world. (Also a throwback to Lindsay Lohan's Rumours. Iconic.)

Taylor in a cage. Again shading the media for saying she “ignores” human campaigns while caged living her perfect life. pic.twitter.com/UbaK4gWuVa

14) Taylor robs a company called "Stream Co." That's a drag on everyone who said she was pulling all her music from streaming services so she could get more money for herself.

Robbing the bank. Referencing when people called her money hungry for not putting music on Spotify. Notice "Stream co." pic.twitter.com/3RBmnXKrUJ

15) Taylor is seen "driving a new Maserati down a dead end street. Faster than the wind, passionate as sin, ending so suddenly." They're lyrics from her song "Red" which famously lost the Grammy for Album of the Year to Daft Punk. (She's actually driving a Bugatti but it still counts...)

Actually one last one Taylor driving a Maserati down a dead end street aka a line from a song on the album Red meaning Red deserved a Grammy pic.twitter.com/9jSSFiOqb6

16) The "Katy Perry" reincarnation of Taylor is caught snapping and recording the other Taylors at the end and says she's gathering receipts that she'll edit later. That's a drag on Kim K's Snapchat expose, where Taylor claimed that the video she released had been edited.

"what are you doing"
"getting receipts. gonna edit this later"

17) The butt grab at the end of the video is a direct reference to the lawsuit she just won over the DJ who groped her.

18) Every single iteration of Taylor Swift was featured climbing over themselves to try and destroy the New Taylor including the 2015 Billboard Taylor, 2009 VMAs Taylor, Speak Now tour Taylor, Red tour Taylor, 2014 VMAs Taylor, Shake It Off Ballerina Taylor and 19 more.

20) The number 13 can be seen in the background of the airplane hanger scene. But you'll have to look reaaaaaally hard.

21) Some fans think the 'real' Taylor can be seen lurking in the background of the final scene. She's the one standing on the wing of the plane looking over at all the previous incarnations of Taylor.

22) When Taylor is sitting on the throne, you can count twelve snakes that surround her. As for the 13th? IT'S HER! SHE'S THE 13TH SNAKE.

Taylor being the 13th snake here! DAYUMMMM! She really planned this out so well! I can only imagine the hardwork she puts in! #LWYMMDvideo pic.twitter.com/C1C24M7zj7

WELL THEN... Say what you want about the Queen of Snakes but all of that is high-key impressive.