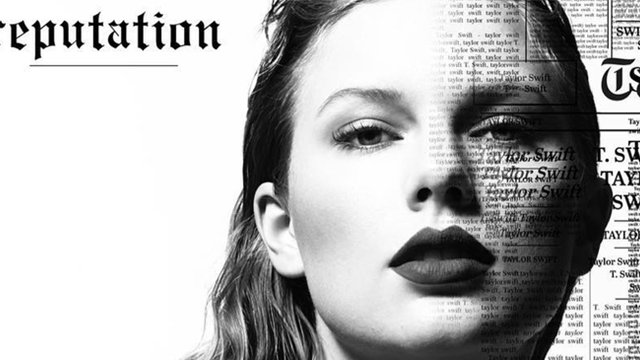 We need to talk about Taylor "reclaiming the snake".

Is there anyone as polarising as Taylor Swift in pop music right now? Judging by the reaction to news of her latest album, we’re struggling to think of a person who inspires such love and hate in equal measure.

By now, most people will be aware that T Swizzle has confirmed that her new album, Reputation, will be coming out Nov. 10. She’s also released the artwork, which you can see below. The first single will be dropping later today.

In the run up to this announcement, Swifty released three short video clips of close-up footage of a snake. Swift is well known for referencing her public perception in her music/content (see ‘Shake It Off’ and ‘Blank Space’, both of which addressed her reputation as a serial dater). It’s more than likely that the videos are a reference to the ‘Snake-Gate’ episode that took place last year, a fiasco which heated up the feud between Taylor, Kim Kardashian and her husband Kanye West.

Wait it's legit National Snake Day?!?!?They have holidays for everybody, I mean everything these days!

Many fans have interpreted the snake videos as Taylor “reclaiming the snake”. This, coupled with the name of the album and its media-themed artwork, alludes to a record that will be about Taylor addressing her public image. For many people, this is more than a little problematic.

One tweet managed to hit the nail on the head and has since racked up thousands of retweets.

Many feel that ever since the infamous 2009 VMA’s incident when Kanye interrupted Taylor’s acceptance speech, she has used her white privilege to play the victim while demonizing Kanye West, a black man, to further her career. Now, people are concerned that Taylor will use the same tactic by ‘reclaiming the snake’ to, again, paint herself as a victim.

Taylor Swift stayed true to white woman form. Playing the victim isn't only an amazing branding/PR move, it's a way of white life.

This is totally possible. And we’ll only fully know when the album drops. But, as Buzzfeed pointed out, it might not be that simple.

“Is the snake a symbol of her or her mistakes? Will she turn the snake on haters/media/men that she says don’t understand her?” writes Alanna Bennett. “Is it a sign that she’s addressing the snake in the room and may put one of her biggest feuds behind her during the VMAs?”

Reclaiming the snake could mean many things. Taylor’s PR has been consistently tone deaf over the years, but maybe – just maybe – she might attempt to turn things around. Perhaps this is wishful thinking, but maybe it’s best not to judge until then?

But here's what would have been better; if Taylor decided not to revisit the snakes, Kanye and Kim or this whole stinking mess at all. Taylor is one of the biggest selling artists on the planet, she really didn't need to dig all this up again. Sure, she's got us talking but at what price? Taylor should have moved on and reasserted herself as one of the most powerful artists in music. This feels like the complete opposite.