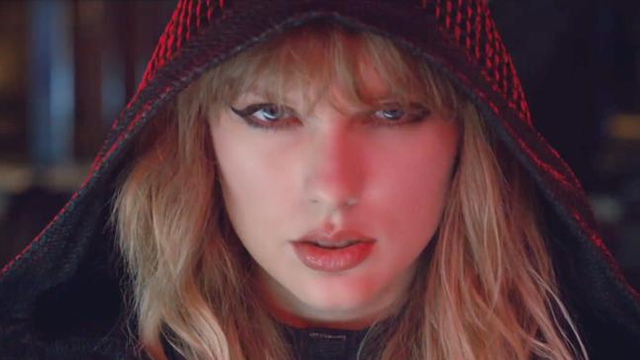 The lyrics to 'Getaway Car' are suspiciously IDENTICAL to a song that already exists...

Taylor Swift is no stranger to being accused of stealing lyrics. Earlier this year, she caught a lawsuit from 3LW after being accused of stealing their "Playas Gon' Play" lyrics for her smash hit song 'Shake It Off'. And now, she's being called out on the internet for ~borrowing~ a certain line from a song by none other than teen icon and adult pop Queen, Hilary Duff.

In Taylor's 'Getaway Car', she sings "X marks the spot where we fell apart," which just so happens to be an EXACT line from Hilary's 'Breathe In. Breathe Out.' that was released in 2015.

Fans are now noticing the use of the same lyric and they're taking to Twitter to call TS out - and scream about the fact that Hilary's lyrics just made their way into Taylor's arsenal of words.

Really, Taylor? You're gonna rip off Hilary Duff's "Breathe In. Breathe Out." on "Getaway Car" and think we won't notice?

"X marks the spot where we fell apart"?

X Marks the spot where we fell apart...AM i listening to @taylorswift13 or @HilaryDuff Breathe in Breathe out. Don't get me wrong I love Taylor but the second i heard that i immediately thought of Hilary.

“X marks the spot where we left our hearts” - icb Taylor plagiarized the true queen of pop, Hilary Duff.

Taylor Swift ripped of a lyric from Hilary Duff’s song, Breathe In, Breathe Out & I will never stop laughing at this pic pic.twitter.com/CSlZ3cEran

But there's a plot twist in this lyrical saga that none of us saw coming. Taylor Swift is actually a HUGE Hilary Duff fan. Back when Hilary's album dropped, and when Taylor was active 24/7 on Tumblr, a fan asked her what her favourite track on the album was. Her reply? BREATHE IN. BREATHE OUT.

Did Taylor pay homage to the song on purpose? (Almost certainly.) Did she swipe the lyrics on the DL hoping no one would notice? (Maybe...) Are the original writers of the lyrics credited on the track? (So far, Wikipedia only lists Swift and Jack Antonoff on the writing credits...) WILL HILARY BE SEEING HER IN COURT?! (Lol probs not.)

Whatever happens, we're sure these two pop legends can come to a fair agreement about those iconic lyrics and live to fangirl over each other another day.