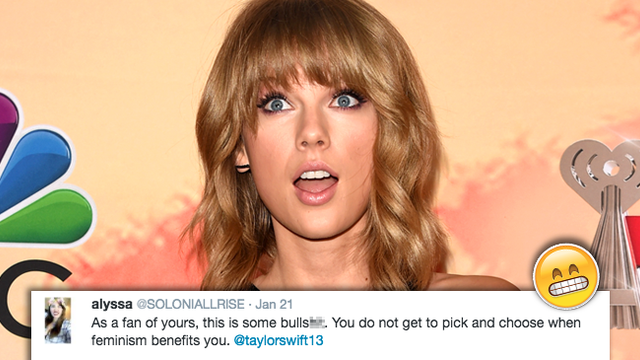 "You do not get to pick and choose when feminism benefits you."

This past weekend saw the largest demonstration in US history as the world united to participate in the Women's March. Millions and millions of people (and dogs) came together to march in cities across the globe to make their voices heard about issues such as women's rights, LGBTQ+ rights and equality to name a few.

Halsey, Zendaya, Miley Cyrus, Troye Sivan, Hari Nef, Olly Alexander, Emma Watson, Lena Dunham, Katy Perry, Ariana Grande and Rihanna (who literally hopped off a plane in NYC from Paris and headed out to join the march straight away) all demonstrated in their respective cities with many also tweeting their support from home, like Kim Kardashian.

Someone else who was tweeting from home was famous feminist Taylor Swift.

So much love, pride, and respect for those who marched. I'm proud to be a woman today, and every day. #WomensMarch

But her remarks about the March didn't go down too well on Twitter. Taylor, who has often been incredibly vocal about feminist issues and believes women shouldn't tear each other down despite releasing the alleged Katy Perry inspired track 'Bad Blood' back in 2013, was called out by her fans for being a part-time feminist.

@taylorswift13 you got a bad leg or something? Why didn't you March?

@taylorswift13 1 tweet and she back to being a feminist. Yet where have you been pic.twitter.com/1CSqSxQVjy

She wasn't even there and she still got meme'd.

People were left wondering why she decided to make her voice heard now, instead of during the election where she was infamously silent right up until election day.

@taylorswift13 but where were you during the entire election?

Others were quick to counter argue the comment by saying that music doesn't need to be political and that Taylor has absolutely no obligation to say anything.

@jordanrosstv @OfficialYMF maybe because she has supporters from both camps and she respects that? Music doesn't have to be political.

@ladyofthelorde taylor doesn't speak: gets hate
taylor speaks: gets hate
give the girl a fucking break

@ladyofthelorde @SOLONIALLRlSE @taylorswift13 You have to understand that she does not have to prove anything to anyone, leave her alone.

Hmmm, interesting. What do you make of Taylor's comments? Let us know in the comments.