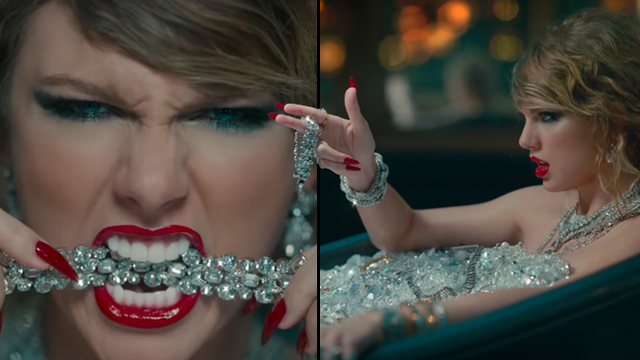 It's a little suspicious, sure but the real reference has nothing to do with Kim K.

Don't know if you know this but um, Taylor Swift dropped a new music video for her new song 'Look What You Made Me Do' earlier this week. It's quite good. Although, not good if you don't like snakes. Or shade. Or tea. Or zombies. Or Taylor Swift herself.

Anyway, as soon as the video dropped, Taylor stans and Taylor haters alike were out in full force, pinpointing details, highlighting callbacks and savage drags throughout the video but one visual in particular seems to have pissed a lot of people off because of it's ~apparent~ reference to Kim Kardashian.

There's a scene in the video where Taylor can be seen lying in a bathtub full of diamonds and pearls and non-stans are accusing her of mocking the horrible situation that Kim found herself in back in 2016 when she was robbed at gunpoint.

Here's a little backstory of what happened to Kim if you haven't been *ahem* keeping up... Back in October 2016, Kim was robbed at gunpoint in her apartment in Paris for over $10m worth in jewellery, including a $4m ring she had posted on Instagram earlier that week. The robbers reportedly tied her up, gagged her and threw her in the bathroom (on the floor, not in the tub.)

Thanks to the other blatant references to Kim and Kanye in the video, many people think that scene is a direct reference to Kim. The close up shots of the diamond rings on her fingers. The gun sign that she makes with her hands. The bathroom, the tub... even down to the way Taylor almost gags herself with a diamond choker.

But, as many of Taylor's fans have pointed out, while the scene DOES unfortunately bare a few striking similarities to Kim's ordeal, it's true reference comes from a speech she gave about the character she portrays in the video for 'Blank Space'.

At The Taylor Swift Experience at the Grammy Museum on September 30th 2015, Taylor spoke about how she wrote "Blank Space" in response to the media and their continued obsession with her love life. Towards the end of the speech, she described the over-exaggerated portrayal of her personality that the media created, which she ultimately ended up using for the video.

She said: "She jet sets around the world collecting men, and she can get any of them but she's so clingy that they leave and she cries and then she gets another one in her web and she traps them and locks them in her mansion. And then she's crying in her marble bathtub surrounded by pearls."

So there you have it, the COMPLETE visual uttered by Taylor herself, over an entire year before Kim's robbery even happened. Taylor hasn't released any statements about ANYTHING regarding the video just yet but she has been liking posts on Tumblr, including THIS one that points out the 'Blank Space' reference.

I guess there's your confirmation. Bye.