The End Of Taylor Swift’s Music Video So Savage, You’ll Either Love It Or Absolutely Hate It 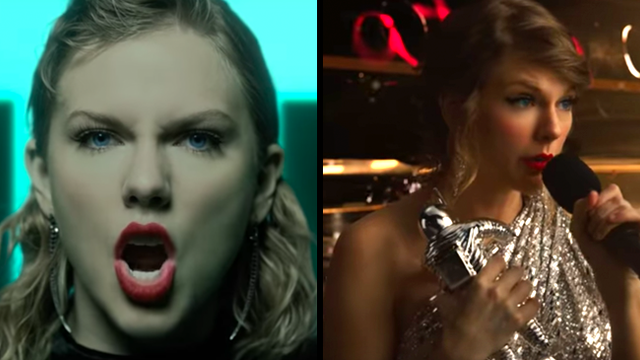 Is this Taylor's most iconic music video yet?

Taylor Swift just dropped the music video for her new song, 'Look What You Made Me Do' at the VMAs on Sunday (Aug 27) and almost killed several people on Twitter in the process.

The song itself has already shattered Vevo and Spotify records and the brand new video will probably garner more views than there are people the world within the next five days.

At the end of the video, we see all the previous incarnations of Taylor (Out Of The Woods Taylor, You Belong With Me Taylor, Snake Taylor, 2009 VMAs Taylor... you get the drift) scrambling to try and tear down the new Taylor and then we see them all lined up in front of a huge airplane with the word 'reputation' written on the side.

Okay but can we talk about how iconic this scen is like wow..... I'm shook @taylorswift13 #LookWhatYouMadeMeDo pic.twitter.com/44Yw5PR0GQ

AND THEN... all the old Taylor's start interacting with each other and it was SAVAGE.

Anyway, everyone is absolutely LOSING it over the apparent self-drag and thick shade cast at the whole Kim/Kanye snapchat receipts/'bitch' lyrics situation and are already crowning it as the 'Video of the Year' in 2018.

Taylor swift to the Haters pic.twitter.com/xi840ITljW

THIS IS TAYLOR SWIFT'S MOST ICONIC MUSIC VIDEO EVER

TAYLOR SWIFT JUST MADE EVERY JOKE AGAINST HER INTO A BIG JOKE AGAINST EVERYONE ELSE I LITERALLY.........CANNOT FIND MY WIG

But of course, the song and video continued to divide opinions on Twitter... not everyone loved her salty attitude in the video.

What do you think of the video? Do you care? Did you even see it? No? Alright then... do you want to? No? Well, here's the full video anyway...