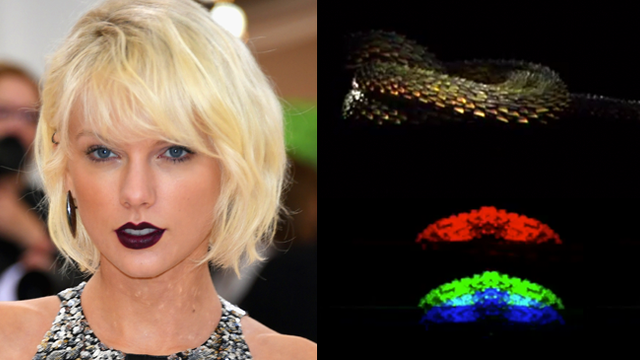 She's reclaiming the snake and sending out subliminal messages in the process.

Taylor of House Swift, the first of her name, Queen of the Charts, Breaker of Records, Hater of all streaming services, Mother of Snakes is plotting her return to the music industry and she *thought* she was being pretty secretive about it...

It's been a few days since Taylor deleted her entire online presence (a move that popstars have now adopted as their go-to for when they're about to embark on a new era) and left the world shook in the process.

On Monday, she tried to upstage the solar eclipse when she dropped a 10 second silent video of what looks like a snake and on Tuesday, at the exact same time, she dropped an even longer clip with the next half of the snake.

Now, after an intense 48 hours staring at the scales, fans have noticed some subliminal messaging in the body of the creature that hints to a release date of her new single and eventual album.

Apparently, if you pause at the right moments, there's some hidden numbers that show up on the scales of the snake throughout the video when it does that weird little RBG colour blip.

On closer inspection of the clip it appears there could be a '2' and a '5' on the tail. Indicating a lead single could drop Friday Aug 25th. pic.twitter.com/gFf5oPjldp

25? That could mean anything, right?! Maybe it's a warning to Adele that Taylor is coming for her record-breaking album? Maybe it's a tribute to her best friends Selena Gomez and Karlie Kloss who, coincidentally, both turned 25 this year. But fans have also sleuthed on the time that the videos have been dropping - 8am PST, on the dot - which means that their theory totally checks out.

As for the album? Fans think the actual release date for the ALBUM will be October 20th? Why? Well, mainly because she has released every single one of her albums in October and... get this, the length of the damn videos.

That's not the only conspiracy theory about the new era either, Swifties have been going into overdrive trying to find out the name of the single, the name of the album and every lyrics from the tracks.

1) There's a suspicious greetings card that popped up at the same time that Taylor dropped the videos - and it has 13 words on it.

Taylor possibly working with American Greetings? She recently followed them on FB and Amos has possibly been there #TS6IsComing pic.twitter.com/mOcGwvWQgA

2) Her currently blank website has hidden coded messages in the HTML.

YALL here's some of the coding in @taylorswift13 blacked out website right now and what it translates to... she is coming. pic.twitter.com/x0JFydGnJc

According to Genius, Taylor Swift's new single is called "Timeless".
A website with the name was also created. #TS6isComing pic.twitter.com/76IXODiju9

Side note: I would STRONGLY urge MI5, MI6, FBI and the CIA to hire some of these god damn Swifties because this level of sleuthing could bring down nations.

So, now that we have all this new information, what can we expect her next move to be? Will Taylor perform at the VMAs on Sunday and make Britney's Slave 4 U duet with Banana the Boa the second most iconic snake performance of all time? Will we ~actually~ be blessed with music that we never asked for but on some level have been unconsciously and desperately craving for years this Friday?

Who knows but what we DO know is... Taylor's dark era upon us and she NOT f*cking around.