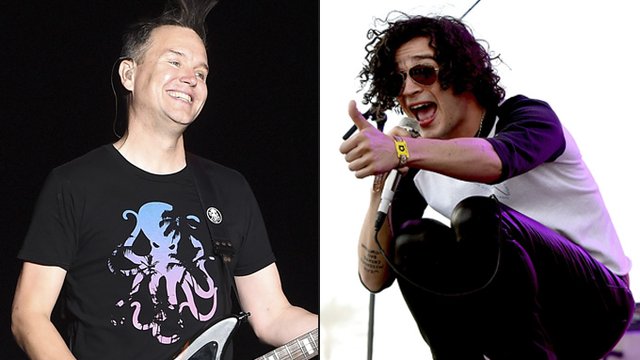 The two bands talk possible duet after a perfect cover of one of their songs is posted online.

Exciting news for all music fans today as Blink-182 and The 1975 could be headed into the studio for a collaboration. Maybe...

Mark Hoppus and Matty Healy have been chatting over Twitter this weekend after an epic mash up cover was posted online by We Are The In Crowd's Cameron Hurley, playing The 1975's 'Girls' in the style of Blink's Enema Of The State-era.

Listen to the incredible cover version below:

And we weren't the only ones impressed by this new take on the track, Matty Healy linking to the song on Twitter in a message to Blink's Mark.

Mate have you heard this I'm in love @markhoppus https://t.co/XQUW7kwiQR

Matty is a longtime fan of the pop punk genre, The 1975 having covered the likes of Fall Out Boy's 'Grand Theft Autumn' in their early days when they were still called Drive Like I Do.

But, most excitingly of all, Mark responded to the Tweet with a suggestion that the two bands should get in the studio and create their own take on the classic track.

This has been brought to my attention. @the1975 I think we should cover our/your/his song.https://t.co/4q2VaJLcJZ

Just imagine the possibilities here. They could try out other tracks too. Imagine a The 1975 take on 'I Miss You'. Or a pop punk version of 'The Sound'. We need a full collab album immediately boys, clear your schedules now!

This isn't the first high profile cover version of a The 1975 song we've seen recently - as previously reported, Dashboard Confessional put their own emo spin on 'Sex' as part of a covers EP last week.

Are you ready for a possible Blink and The 1975 team-up? Let us know below.