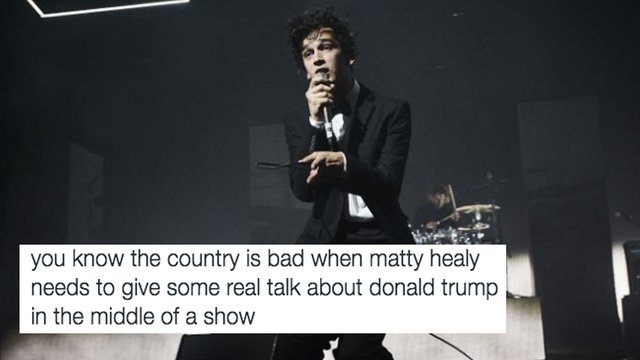 Watch Matty address US audiences as election day draws near...

The 1975's Matty Healy has weighed in on the current US election with a passionate speech at a recent show.

The San Jose concert took place on the same night as the final debate between Donald Trump and Hilary Clinton (October 19th) and Matty did not hold back in his opinions or choice of language:

"Donald Trump is a massive c**t... On behalf of England, we love you. Let's all do the right thing..."
- Matty Healy #DebateNight pic.twitter.com/tNz0FszeVu

Previously, the frontman addressed the audience at the LA Forum directly, urging them to vote and echoing a phrase many online have been tweeting recently - "F*ck Donald Trump".

please enjoy this video of Matt Healy saying "fuck Donald Trump, you have to vote" #sandiego #the1975 pic.twitter.com/rlFxSAtW0V

In his speech, Matty recalled the Brexit vote in the UK earlier this year which saw Britain decide to leave the European Union, a decision that has been met with widespread criticism among millennials.

This year – politically, democratically, we completely fucked it up. Listen, I’m not here to talk about politics, but what I’m gonna say is what happened in our country is that a younger generation left the responsibility… we thought the older generation was going to be empathetic and understanding and responsible and do the right thing… and it didn’t. And everything kind of backfired, and everyone who hadn’t voted felt like a twat. You’re very very close to a very very fucked up situation. I can see literally thousands of young liberal, hopefully intelligent young people here. Look, we still got a shock. Fuck Donald Trump, you have to vote! This is the world calling: Vote!

Matty made a similar speech at the Glastonbury Festival back in June, directly following the Brexit vote, expressing his outrage at the result and its impact on young people.

Interestingly, despite the obviously contentious nature of this election, he is one of very few musicians in 2016 to have spoken out so passionately about this subject. While many pop stars like Katy Perry have voiced support for Hilary Clinton, few have articulated the anger many young people feel about the current political state quite as well as Matty. The 1975's position as a trendsetting act, who frequently connect with their audience through the likes of Tumblr, make his words seem surprisingly powerful, inadvertently positioning him as as, cliched as it may sound, "voice of the youth".

Perhaps this is why his comments got such a strong and thankful reaction on social media.

you know the country is bad when matty healy needs to give some real talk about donald trump in the middle of a show pic.twitter.com/ZY7Ntpg1Yq

The 1975 return to the UK this December. The US Presidential election - thankfully - ends on November 8th.

What do you guys think of Matty's comments? Do you agree? Do you wish more musicians would speak out? Or does it not matter? Let us know below.