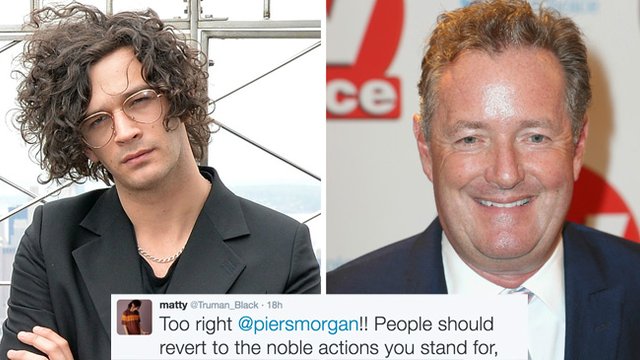 Just a day after dragging president-elect Donald Trump on Twitter, Matty Healy has started 2017 right by dragging more members of the right-wing establishment. This time it's journalist and professional attention-seeker Piers Morgan.

Piers Morgan took to Twitter yesterday (Jan 2) to attack 'rude' and 'disrespectful' people who publicly refuse an honour, such as a knighthood, from the Queen. An 'honour', for our non-UK friends, is an award given by the Royal Family in the UK to mark an individuals' personal bravery, achievement, or service to the United Kingdom. Many people have turned these titles down, privately and publicly, usually because they're opposed to the royal family or the honours system. Fair enough.

But, for a man as odious as Piers Morgan to start deciding what is considered 'rude' or 'disrespectful' was obviously one step too far for Matty, so he responded with this mic-drop of a tweet.

Too right @piersmorgan!! People should revert to the noble actions you stand for, such as hacking the phones of dead young women

Piers Morgan, a former newspaper editor, was questioned twice about the phone hacking scandal which involved various UK newspapers over several years hacking the voicemails of celebrities and also a 13-year-old girl named Milly Dowler, who went missing and was subsequently found murdered. All charges of phone hacking against Morgan were dropped.

Still, given that Piers Morgan recently claimed that Lady Gaga used her PTSD, caused by a sexual assault, to promote her new album, it's hard to fathom how Piers can consider himself some sort of moral authority on anything.

Morgan responded by claiming 'Truman' had got the wrong newspaper, cue this soon-to-be-iconic tweet.

@piersmorgan oh yeah you're right, you'd never do anything like that I hate to get my facts wrong. Love your profile pic with Ronnie Corbett

And then Piers called 'Truman' an "uninformed little twerp" and then it was time for the fandom to get involved.

This is some premium rare beef.

Matty should get an OBE for this.

Best thing so far about 2017 has to be Matty Healy dragging Donald Trump and Piers Morgan pic.twitter.com/lynryniSVI

Bet you any money this will become a lyric on the new album.

i'M CCRYING MY HEART OUT, MATTY HEALY CHANGED HIS BIO INTO WHAT PIERS MORGAN HAD SAID TO HIM EARLIER THIS IS FCKN MENTAL pic.twitter.com/AGHi3nSEkj

“@piersmorgan: Ronnie was a proper star, sunshine.
You're just a lying, uninformed little twerp. https://t.co/Mt7vwv3OUI” who's the liar???

To which Piers responded with this:

Let your son fight his own battles, Denise. He seems quite happy to start them. https://t.co/7dJ0TRR0zd

Denise isn't having any of it.

@piersmorgan Im not fighting them Piers. Im referencing that you called him a liar. I learnt quite a lot when I settled with the Mirror.

Moral of the story? Start 2017 the Matty way: stay angry and don't let people like Piers Morgan get away with bullshit like this.