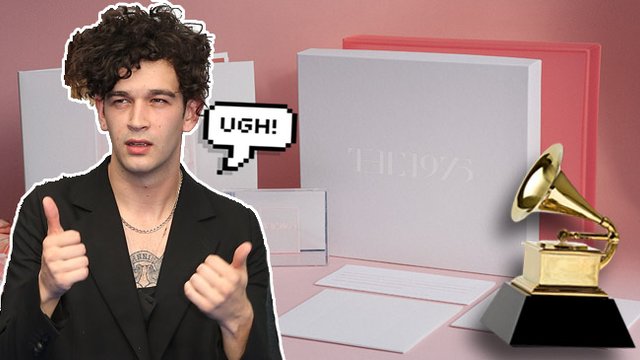 The 1975's Matty Healy has spoken out about their recent Grammy nomination, joking that they'd rather not win just for a "f*cking box".

The band missed out on all music-related categories but are shortlisted for the coveted Best Boxed Or Special Limited Edition Package award, up against the likes of Edith Piaf, Paul McCartney, J.Views, and Trey Anastasio.

Matty was featured in a profile by the New Yorker, interviewed on the day the award noms were officially announced, and it seems that we weren't the only ones confused by the boy's odd placing in the category...

Healy received several text messages from George Daniel, the 1975’s drummer and electro-sound-maker, with whom he writes the songs. "George is kicking off about the Grammys," he noted. The nominations had come out that morning, and the 1975 was nominated for Best Boxed or Special Limited Edition Package, but not for its music. "I don't want a Grammy for a fucking box," Healy said, with a sardonic laugh.

What we wouldn't give to be able to read those texts from George.

Matty also talks in depth about the constant struggles of appearing too egotistical as a rock star in 2017...

"For every rock-star move I make onstage, I do penance," he said. He brought his palms together piously. "I will have these true moments of embracing the fucking situation I am in and being what people want me to be, but then immediately followed by feeling like a fraud, and that vulnerability being experienced and bought back into by the fans." He sipped his English breakfast tea. "Because the only place that kind of ego is allowed nowadays is hip-hop. It is simply not allowed in people who are in a rock band."

Tbf, after the rap skills of 'Loving Someone' he's basically a hip hop star himself right? Right guys?!

Find out if The 1975 win an award for a f*cking box when the Grammys take place on Sunday February 12th.