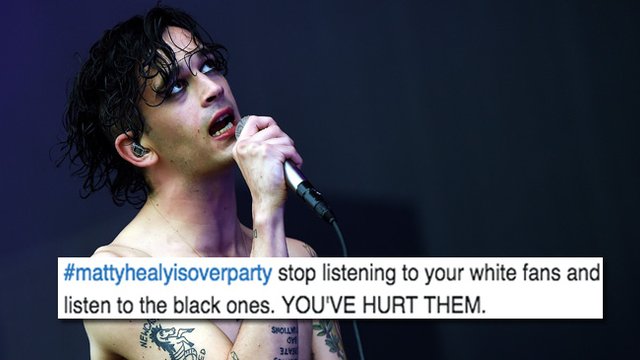 #mattyhealyisoverparty began trending on social media as fans debated over the clip of the singer rapping backstage at a festival.

The 1975 fans have hit out at lead singer Matty Healy after he appeared to say the 'N word' in an Instagram live video yesterday (July 9th).

The band were in Glasgow to perform at the TRNSMT festival when guitarist Adam Hann posted the clip of Matty dancing backstage and rapping along to 'Caroline' by Amine.

Here's the video where @Truman_Black says the n word if anyone wants it because it was on a live story and will disappear pic.twitter.com/BuUdYE0MZV

At the start of the video, he appears to rap, or at least mime along, to the lyrics "Killa, West side n*gga".

Matty and the band both quickly became trending topics on Twitter as did the #mattyhealyisoverparty as fans took to social media to condemn the video:

#mattyhealyisoverparty stop listening to your white fans and listen to the black ones. YOU'VE HURT THEM. @Truman_Black

yikes @ people defending matty healy for saying the n word, it doesn't matter if he was mouthing words to a song or not he still said it

So y'all gonna pretend that Matty healy didn't mouth the n word and will still be hyping his pretentious ass pic.twitter.com/6WVgAL0rNT

"I'm so far up matty healy's ass and white so i really don't see the problem with him saying the n word because im privileged hehehe " pic.twitter.com/Q4mxtZ0Lo2

people really out here defending matty healy for mouthing the n word because "we all know he's problematic" ??? pic.twitter.com/VgTgEgiz9F

No official comment has been released yet from anyone within the band's camp. We'll keep you posted if a statement on the situation appears.