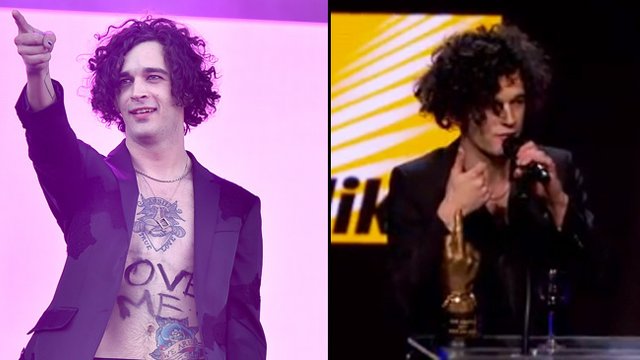 Matty had a grand old time at the London ceremony as The 1975 took home the Best Live Act award.

The 1975's Matty Healy was at the NME awards last night (February 15th) to collect the trophy for Best Live Act - but ended up giving away his statue to one lucky fan!

The annual awards show/messy night out took place at London's Brixton Academy and as Matty approached the stage, we did what any good music journalist would do, begrudgingly putting our complimentary Jack Daniels cocktail to one side and running down the front to record all the action.

ICYMI @the1975 won Best Live Band at last night's #VO5NMEAwards and @Truman_Black's speech was on pointpic.twitter.com/syiqanE8st

Yes, that is The Pussycat Dolls' Ashley Roberts looking slightly confused on the side of the stage.

But Matty's big night out didn't end there, as he still found time to take a few selfies with pop legends Busted, the boys from Bastille and TV documentary maker extraordinaire Louis Theroux. (Quite jealous of this one actually. We spotted Louis across the bar early on but were too scared to say anything.)

And, finally, he wrapped the whole evening up by casually gifting his middle-fingered statue to a fan waiting around outside the venue.

Matty gave his award to this girl he's the sweetest @Truman_Black @NME @the1975 pic.twitter.com/B0iWgWPKyb

She seems pretty chuffed with it...

Oh, and we got to shake Michael Eavis' hand as he was leaving so that's rather nice too.

Here's the full list of winners from the VO5 NME Awards Show 2017:

Villain Of The Year: Nigel Farage

Hero Of The Year: Beyoncé