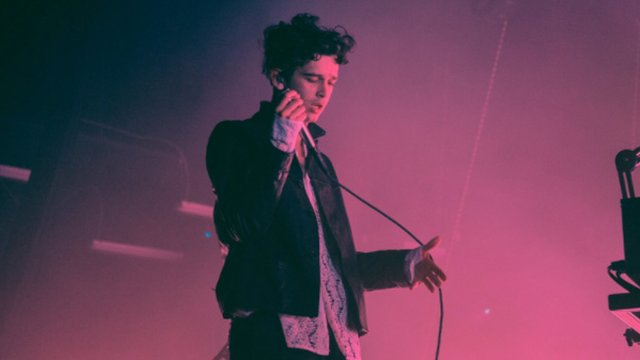 The 1975 frontman interrupted a concert in Detroit last night (May 22nd) to discuss the situation in his home city following an explosion at an Ariana Grande concert.

Matty Healy has paid tribute to those lost in the Manchester attack at an Ariana Grande concert last night (May 22nd) with an impassioned speech onstage during a The 1975 concert.

The band were performing in Detroit as part of their current US arena tour when news broke of the attack. The 1975 are, of course, from the Manchester area, having formed while at school together in the city.

"I'm bored of nationalism and I'm bored of racism. It's over. Nationalism, religion, all these regressive things, they're over. We can't carry on in the way that we're carrying on...We're from Manchester and where we used to hang out, the actual place where we used to hang out, someone put a bomb in there tonight and then killed a bunch of kids that were going to a f****** show in Manchester. I don't need to be educated on f****** anything to say that that’s b*******."

Greater Manchester Police have confirmed multiple fatalities and injuries, including young children, after a bomb exploded in the concert venue foyer at around 10.30pm local time. They have also established an emergency telephone number in response to the attack. It is: 0161 856 9400. If you are concerned about a loved one, this is the number you need to call.

Watch Matty address the attacks on stage in the video below (via @Yasmeen0712):