Did The 1975 Just Accidentally Reveal A New Song Title? 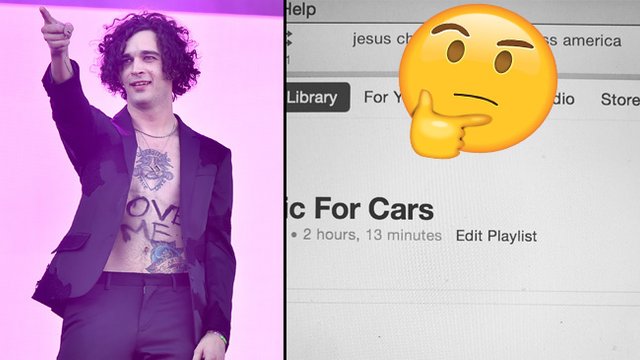 Matty took to Instagram to give us all a brief update on progress in the studio as the band prepare their third album 'Music For Cars'.

The 1975 are currently hard at work on their much anticipated third album Music For Cars and now lead singer Matty Healy appears to have revealed a new song title, as well as the record's current length, in a post on social media.

The frontman posted a photo to his Instagram last night (August 30th) that appeared to show a new song playing in his iTunes library entitled 'jesus christ 2005 god bless america'. It is taken from a playlist entitled Music For Cars which currently has a running time of 2 hours, 13 minutes.

the need to start editing

When questioned by a fan in the comments, Matty did confirm that this is a current title of one of the songs on the new album.

So, what do you think? The title certainly is in keeping with the band's recent political statements made against Donald Trump while on tour earlier this year. Plus, America and Religion were both prominent themes on I Like It When You Sleep... so perhaps this will mark a continuation of that musical style? As for that running time, obviously the album release is a long way off and will be given a proper trim before then, but we do hope the boys will stick to their penchant for full-length, experimental records with a wide variety of topics and genres that clock in at around the 17 track mark. Basically, we are hoping they will keep things epic.

What do you guys think of the title? Let us know over in the Facebook comments.