BRITS 2017: People Think The 1975's Performance Was Hacked But Here's What Really Happened 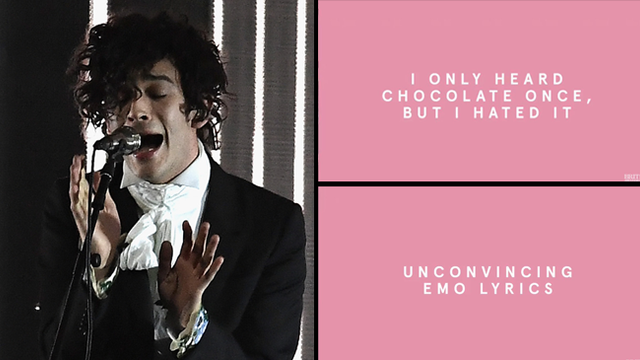 It's not the first time this has happened...

If you happened to catch The 1975's incredible BRIT awards performance of 'The Sound', you'll have probably noticed something a bit weird about the whole thing - like the fact that messages kept popping up on screen during the song.

At random points, pink title cards flashed up with some pretty incriminating comments on them, leading people to think the band's set and live broadcast had been infiltrated by some kind of pink-loving hacker group.

What's happening to the 1975's performance at #BRITs2017? Elaborate stunt, trying to be ironic which of course now has me tweeting about it?

Someone hacked The 1975 Brit performance, and I have to say I completely agree with these comments pic.twitter.com/k2u17DZlSM

But it was all part of the band's master plan, you see... If you've ever watched the video for 'The Sound', you'll know that these same title cards pop up during the vid and unfortunately - as hilarious as Matty and the boys would have found it - it was not a mastermind cyber attack.

On their tour, fans even set up a project to make their own title cards inspired by 'The Sound' video. Cute, right. They submitted some nice ones.

Of course, everyone who stans for The 1975 managed to catch the reference, while everyone else sat at home was left sweating because they thought one of the biggest networks in the UK had just been taken down by international hackers. Jokes you on guyyyyyys.

people thinking the brits was hacked during the 1975, it's on their music video for the song it was meant to be there #BRITs2017

Me laughing at the people who actually thought @the1975 got hacked at the #BRITs2017 #the1975 pic.twitter.com/EchpQGwnYU

Oli Sykes thought it was great too.

Flash cards on @the1975 Brit set is genius

Which title card will you be stealing for your new Twitter header? We're taking 'Unconvincing Emo Lyrics'.