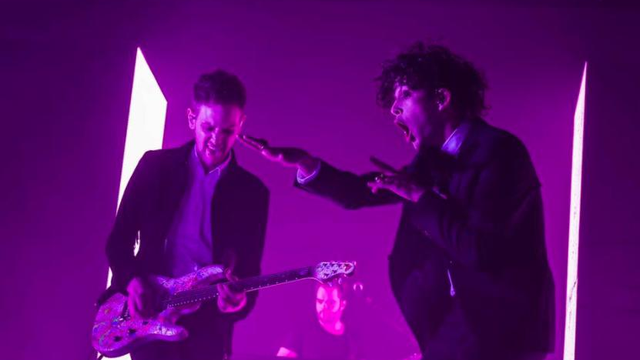 A special festive treat from Matty and the boys has just arrived!

It's here! It's really here!

Merry Christmas everyone - check out The 1975 LIVE at The O2 Arena below:

The 1975
Love Me
UGH!
Heart Out
A Change Of Heart
Robbers
I like it when you sleep, for you are so beautiful yet so unaware of it
M.O.N.E.Y.
Undo
Milk
Loving Someone
She’s American
Please Be Naked
Lostmyhead
Somebody Else
Fallingforyou
Paris
Girls
Sex
-----------
Medicine
If I Believe You
Chocolate
The Sound

God bless us - everyone.

After working the internet (and us tbh) into a frenzy of speculation, The 1975 have FINALLY revealed what they're dropping on Xmas day.

That's right! For anyone that have missed The 1975 on tour, or simply wanna get another Matty Healy fix, the landmark O2 London show of the tour will be available to watch in fuil on Xmas day. WAY more entertaining that boring tv repeats, amiriteladies?

We'll just be over here crying into our mince pies that we're still not getting the video for 'She's American'...

Just as we had resigned ourselves to the fact that The 1975's latest video would never appear, they drop a surprise tweet that has us shaken to our very core!

What the f*ck does that mean Matty? We can't wait any longer!

This mysterious Christmas Day release could be the long-awaited 'She's American' video or the rumoured clip for 'Loving Someone' or even, whisper it, that Christmas song that they were supposedly working on...

Yep, you read that right - The 1975 were working on a Christmas single and mentioned it during several concerts, sending the fandom into hysterics but no release date was ever revealed and manager Jamie Oborne even claiming that the idea had been abandoned.

Me: I don't really care about Christmas
The 1975: we're releasing a Christmas song
Me: JOY TO THE WORLD THE LORD HAS COME-

the 1975 may or may not release the christmas song pic.twitter.com/ZP0KfjZmtr

Have they been saving this festive present for the big day itself? Fingers crossed.

Check back on Christmas Day to see if we finally get to hear what a Matty Xmas sounds like. Personally, we reckon it would sound kind of like Wham's 'Last Christmas' with a righteous spoken word middle 8 in full Band Aid style.

So, will The 1975 drop the finest Christmas single since The Darkness? Or will it be the 'She's American' video? Or something else entirely?