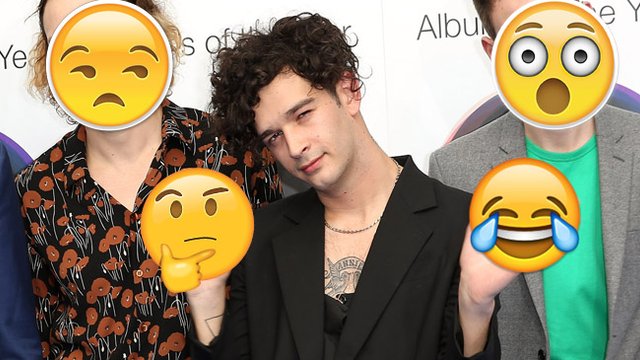 This must be my dream!

Your dreams have finally been answered - The 1975-themed emojis now exist!

Yes, the Mancunian band, currently riding a wave of success from their excellent second album I Like It When You Sleep..., can now be used to express your every emotion, launching the images of their faces via Twitter yesterday.

It's all to celebrate the upcoming Brit Awards where the band are nominated for Best British Band and Best British Album. They will also perform at the awards show on February 22nd at London's O2 Arena.

But do these emojis look anything like Matty and co? Let's find out shall we?

So, first impressions? We reckon Ross and Adam look pretty dead on although Matty's ever-changing hair will make this seem out of date pretty quick. And does George have a mullet?

But The 1975 aren't the only act being honored in this way, with fellow performers Emelie Sandé, Robbie Williams and Little Mix also getting the emoji treatment.

Plus, it seems that there are more acts to come. Which other nominees do you want to see an emoji version of? (apart from Twenty One Pilots obviously, that's sort of a given at this point).

Plus, the BRIT Awards 2017 album, released on Friday 17th February, is now available to pre-order, including tracks of the year by The Weeknd, Ellie Goulding, Zara Larsson, Little Mix, Sia, James Arthur, Clean Bandit, and Christine and the Queens along with Critics’ Choice winner Rag'n'Bone Man.

The Brit Awards 2017 will take place at London's O2 Arena on February 22nd.