The 1975 Just Announced A New EP Called 'What A Shame' 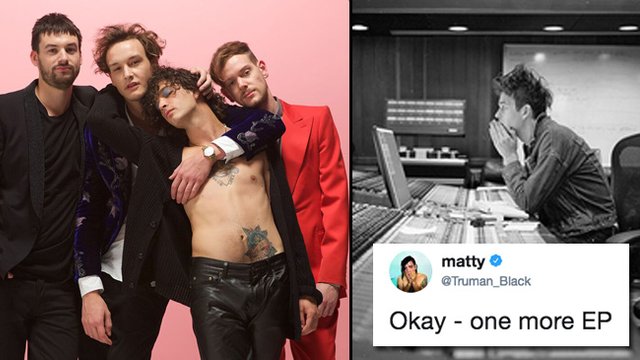 Matty Healy revealed plans for a new release on social media as he works on the band's third album 'Music For Cars'.

The 1975 may be hard at work on their upcoming third album, entitled Music For Cars, which is due for release in 2018, but apparently they've still had time to work on another exciting project - a new EP.

Lead singer Matty Healy took to Twitter to stir up some fan excitement and even give the release a title, 'What A Shame':

What A Shame - The EP

Longtime fans will be well aware that the words 'what a shame' frequently appear in the band's lyrics, popping up during 'Love Me', 'Paris' and 'The Ballad Of Me & My Brain'.

Healy also posted a sneaky behind the scenes shot of him hard at work in the studio, complete with contemplative prayer hands:

This release would be the band's fifth EP and the first since 2013's IV. No word yet on any release date or track details but fingers crossed this one arrives before the end of 2017 as the perfect Christmas present for fans.

They certainly seem ready for it anyway:

you know what's a shame? you torturing us

Sessions for the third The 1975 album are well underway with Matty stating that it will act as the third part of a trilogy story and may be even longer than the previous 17-track opus I Like It When You Sleep For You Are So Beautiful Yet So Unaware Of It.

Get all the latest details on the upcoming The 1975 album, Music For Cars, here.