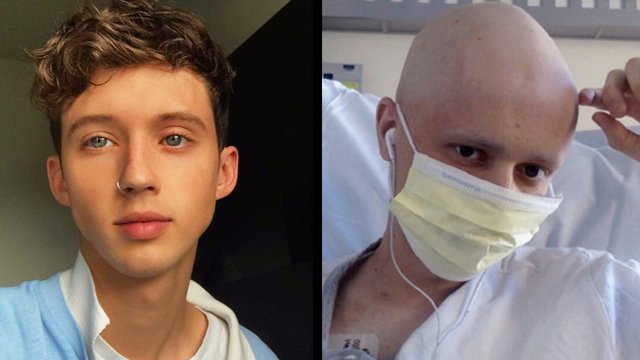 His emotional thank you note to Troye has now gone viral.

This is Dean Eastmond. He's 21, lives in the UK and was diagnosed with Ewing’s Carcoma last year, a rare and aggressive bone and soft tissue cancer.

Because there's no such thing as too much yellow

Dean is also a very talented writer who campaigns on many issues that affect the LGBTQ community, as well as chronicling his own journey since his diagnosis (you can catch up on his progress here). Dean is as inspirational as they come - he’s even set up his own LGBTQ magazine, HISKIND, as well as receiving an Attitude Pride Award this year for his work fighting inequalities in the British healthcare system.

After his first round of treatment was unsuccessful (so far he has had over 14 cycles of chemotherapy, months of radiation and had three ribs removed and half a lung), Dean is now undergoing yet more treatment. Doctors say the chances of this working are at about 20% but if anyone is going to get through this, it’s Dean. He’s a real life fucking hero.

Dean has also been exploring alternative therapies and treatments to give himself the best chance he possibly can. But those cost money, and then there are the hidden costs of cancer too - considering he can’t work full time, it’s hard to make ends meet.

So, Dean put out a call for help and set up a GoFundMe page. And then, almost instantly, our fairy godmother Troye Sivan privately messaged Dean and offered to completely cover the cost of the alternative treatment, saving Dean and his family from being financially ruined, as he put it, “in the most difficult time of all our lives”.

“Within minutes, he had lived up to his offer and donated thousands in the blink of an eye (much to my awe, amazement and slight embarrassment) before popping off to sleep”, Dean wrote, adding, “Troye might have just saved my life, you know.”

On HISKIND, Dean revealed bits of the conversation between himself and Troye and it’s incredibly moving. “Whatever I may have achieved on this planet is minute, pretty inconsequential and deserving of no praise, yet this musician, tucked up in his bed at 3am in LA saw good in me, telling me that I’ve “done so much good for so many people”, explaining how he’d wish I’d do the same if the shoe was on the other foot and nonchalantly said that this lifesaving act he had just performed was the least he could do. My heart still finds itself fluttering in complete adoration for his kindness.”

Thank you Shaun, not only for your tweet, but for raising your kids right. What an awesome family

Dean finishes with a thank you to Troye, “for not only proving to me that kindness really does save lives, but for potentially giving me the one thing I want in this world; an escape rope out of this horrific disease.”

"I know you didn’t do what you did for glory or appreciation, but this is the least I can do to say thank you. When my tumours shrink, my hair grows back and my independence welcomes itself back into my life, I want to dedicate all I am to being someone like Troye, someone who gives without the desire for praise, someone who takes pride in bettering the lives of others and someone other people will look up to with the same eyes I see Troye in. Oh, and it would be fabulous to take him for drink to say thank you, I guess.”

Read Dean's full thank you note to Troye over here.