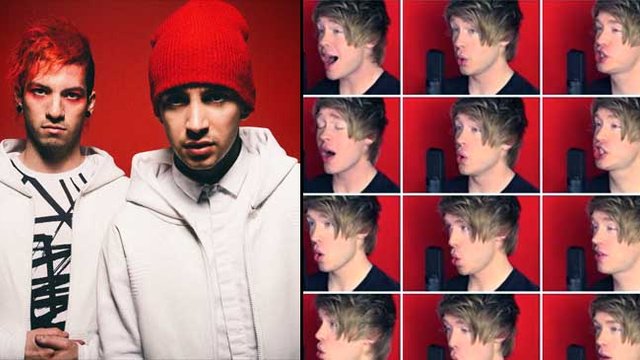 YouTuber Austin Jones spend 230 hours making a medley Tyler and Josh would be very proud of.

A highly dedicated member of the Clique has done the most epic tribute to Twenty One Pilots - performing an acapella medley of all 14 track from their HUGE album Blurryface.

YouTuber Austin Jones has previously posted clips featuring the music of MCR, Panic! At The Disco and Fall Out Boy among others, but it is this latest project that has really got fans going wild. Using 20 different vocal parts, Austin tackles every song on the record and, as he explains in his video description, aims to pay tribute to an album that has meant a great deal to him:

"Blurryface has been such an important album for me for almost 2 years now. On top of that, twenty one pilots has been the most requested band since I started making acapella covers. I always knew that if I ever covered them, I would do something more than just pick one of the bigger singles off of Vessel or Blurryface. This is the best way I could pay tribute to a band that's impacted my life for many years. All 14 songs from Blurryface intertwined into one 8 minute acapella medley. Over 230 hours of work was put into writing the arrangement, recording, producing, mixing, filming, and editing this cover all by myself. I've dedicated almost an entire month to working on only this. I did the absolute best I could, and I will be so lucky if you love it with even just a fraction of the love I have for this band."

Austin has also posted the medley on iTunes, Spotify and Google Play for your listening pleasure.

Check out the Blurryface acapella medley in the video below: