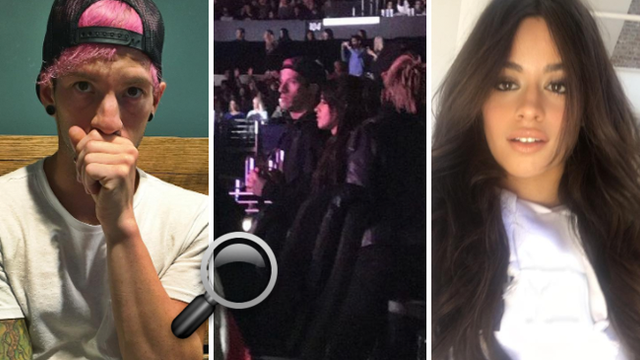 When your high-key fave and your low-key fave collide...

You know that overwhelming fangirl feeling that washes over you when two of your faves finally get to hang out together and your heart just can't take it? That's what happened this weekend with Josh Dun and Fifth Harmony' Camila Cabello.

The pair, who have been friends for a while (if you count liking each other's tweets), were papped hanging out and watching the majesty of Britney Spears at the KIIS Jingle Ball in Los Angeles on Friday (Dec 2).

Here's Josh and Camila having a little bop to Britney's Crazy at the show:

OK BRITNEY IS ON STAGE AND CAMILA CABELLO AND JOSH DUN ARE LITERALLY RIGHT NEXT TO ME pic.twitter.com/kmzjyCHxHk

And here's some excellent sleuth pics of the two at the event.

CAMILA CABELLO AND JOSH DUN STANDING RIGHT NEXT TO ME DURING BRITNEYS PERFORMANCE #KIISJingleBall pic.twitter.com/9BzOTLfF42

Camila even made an appearance on Josh's snapchat too.

Needless to say, the friendship has got the Clique a little bit shook. While some people are loving their high-key fave and building-site chanteuse Camila's little arena boogie...

JOSH AND CAMILA WERE HANGING OUT OMG MY FAVES

The other half are definitely NOT living for it.

the clique: gets mad over josh hanging out with camila
also the clique: ships josh and halsey

Honestly, we're here for this lil' friendship. Two members of two of the biggest bands in the world right now? YAAASSSS - how weird would that musical collab sound?!

Although, we're sure there's one person who isn't very happy about all of this... (Just kidding, but not really...)