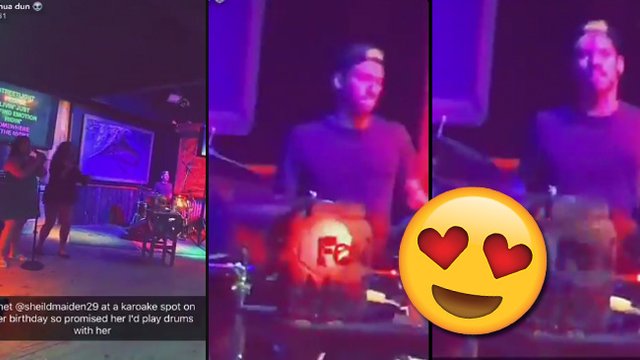 This girl may just be the world's luckiest member of the clique.

Josh Dun has certainly found at least one way to fill his time now that the Blurryface era is at an end, playing drums for a fan's karaoke performance at a bar last night (June 29th).

The Twenty One Pilots drummer posted a short video clip on his Snapchat account backing a pair of vocalists on Journey's classic 'Don't Stop Believing', much to the delight of the birthday girl.

Josh and Tyler just wrapped up their huge world tour with arena and festival dates in the US including several homecoming shows dubbed the 'Tour De Columbus'. They will now return to the studio to work on their next record.

Nothing to see here, just @joshuadun drumming for a fan at karaoke pic.twitter.com/ZbjrSaEtka