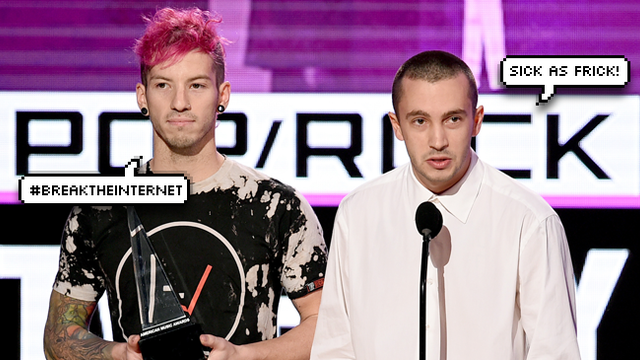 Wearing your own merch... Yeah, Josh did THAT.

Soooo, something pretty cool happened this past weekend. Tyler Joseph and Josh Dun FINALLY showed up at an award ceremony to collect one of their many trophies that 2016 has bestowed upon them!

Thanks to heavy touring schedules and spontaneous baths, the boys haven't attended many award shows this year. But they DID show up to the AMAs and managed to break the actual internet in the process.

You see, as their name was announced as winner of 'Favourite Alternative Artist', Josh took to the stage wearing one of the band's own pieces of merch.

(We're so used to seeing him shirtless on the drums, the official band tee almost didn't even register in our tiny frazzled brains!)

The MINUTE the camera clocked Josh wearing his own merch, the internet went absolutely wild.

josh dun just wore his own band's shirt to accept an award at the AMAs, what a man

josh dun wore his own bands shirt to an award show. when will your fave EVER?

As thousands of fans flocked to the band's online store - the actual website crashed. Yep, Josh did THAT.

It's alright though, it (thankfully) didn't sell out and is still available for you to buy - but ya better be QUICK!

Watch the boys' acceptance speech for the award here:

Your winner for #AMAs Favorite Artist- Alternative Rock is @twentyonepilots! Congratulations on an incredible year! pic.twitter.com/kQoWbLzTRR