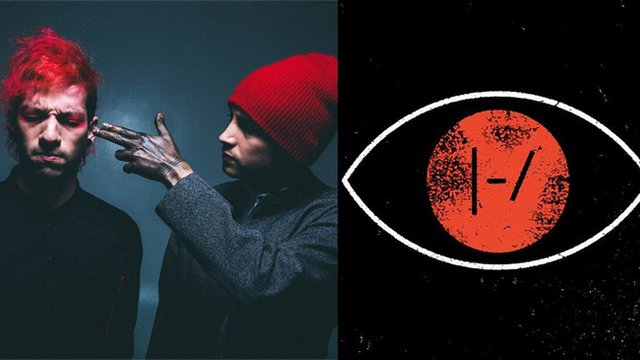 As the clique wait patiently for details on the return of Tyler and Josh, one fan may have just stumbled on some early details about their next record.

Twenty One Pilots are currently hard at work in the recording studio, creating the follow up to 2015's phenomenally successful Blurryface album after wrapping up their tour with a series of hometown dates in Columbus earlier this year.

Details of what's to come are, of course, pretty scarce right now but one eagle-eyed fan thinks they may have found a few interesting details about what to expect next from Tyler and Josh - or, more specifically, what the record might be called.

YouTube user Regional At Shaye made an interesting discovery about the newly revamped Twenty One Pilots website. It turns out that when you hit 'Search Google For Image' on the band's homepage logo, it reveals the message 'don t do that again' (including the space, just like the tweets from the band's previous Blurryface account).

Then, when you search again, the word 'light' appears:

Furthermore, another user named Poodie Doodie applied this method to the various teaser images and lyrics that were posted to the band's official Twitter account after they played their final shows:

This reveals the message 'Twenty One Pilots Echo' which is interesting given that 'Echo' has long been thought of by fans as a potential title for the next album.

These words will likely appear in the Google search because someone has specifically named the files using those terms. Is Tyler trying to send us a message from his laptop? Or did he just write down the first thing that came to mind?

Either way, this certainly has got fans talking and we doubt this will be the last conspiracy theory we come across before the album drops.