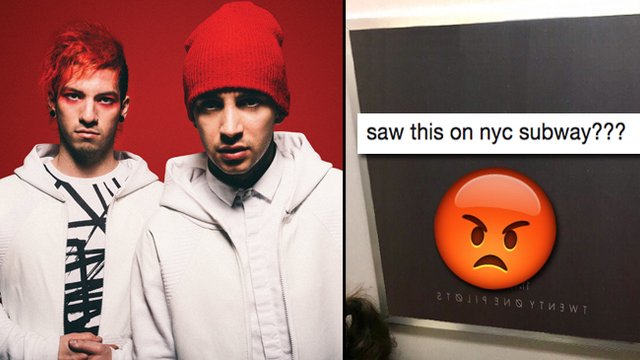 A fan "spotted" an ad for an upcoming new album on the subway but it was just too good to be true...

Sorry to disappoint you Twenty One Pilots fans but you are going to be waiting a bit longer for a new album from Tyler and Josh!

The Skeleton Clique got very excited over the past few days as a subway poster appearing to reveal a return date for TØP went viral after it was posted to Twitter by a user called @tobyonepilots: The poster was designed in a style similar to a recent series of tweets sent from the band's official account announcing their hiatus and appeared to suggest that some kind of release from the band would be arriving on the 17th of November this year.

A lot of fans, of course, got immediately hyped!

THEY DID THIS ON PURPOSE. SOMEONE FOUND IT. WE FOIND IT.

However, a lot of others were quick to question the legitimacy of the pic:

as fake as me pic.twitter.com/Uz93TUdgSZ

Most likely faked everyone! Ran it thru https://t.co/jCLBO5fppP. (it highlights manipulated areas) https://t.co/dp86aKpMTl

Yes, sadly, there will be no new TØP release this November as @tobyonepilots confirmed in a later post that they had been fooling us all this whole time:

Twenty One Pilots are currently in the studio working on their fifth album which you should expect around late 2018/early 2019.